Charlie, I’m so glad to , find you. But I have some bad news.” The e-mail was from Mary. Her daddy Dwayne’s an old buddy. Last saw him around ’74. Served a lot on Okinawa, married a local woman, stayed put when he commissioned out after ‘Nam.

Dwayne had passed last sum­mer. Seems he left a box of stuff for me. Didn’t nobody know where I was, though. Till last month, when Mary saw my mug in the Weekender. Sent e-mail right away. I wrote back with condolences to she and her momma. Offered to treat her to dinner if she would take me to someplace Okinawan.

A week later I met her in the lobby of some Akasaka hotel. Mary’s around 40 now, looks a whole lot like her momma back when. Took me downstairs to this little Okinawan joint called Aka. 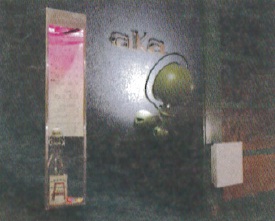 At the door there’s the bottle of Okinawan hooch what got a label with a big red A on it, just like the old A-sign in Okinawa. The A-sign meant a restaurant, bar or whatever was approved for U.S. military folks. That was before Uncle Sam gave Okinawa back in ’72.

Mary left Okinawa ’bout 20 years ago, been in Tokyo ever since. Works in a law office, translates contracts and patents. Good money, she says.

I ordered a shot of Awamori, Sakimoto (¥800) and Mary ordered a cocktail called Rakuen (¥700), said it was made from shikwasaa, that’s an Okinawan citrus, little round thing, sour and full of seeds.

“This is a non-alcoholic cocktail,” Mary said, raising the glass.

“Then it ain’t no cocktail, but cheers.” I countered.

She ordered some raw oys­ters with shikwasaa ponzu (¥300 each) and a green salad with fried eggplant and umi-budoh (¥800).

Umi-budoh is a kind of seaweed and the name means “sea grapes” ’cause that’s what they look like. Yep, like a bunch of tiny grapes, pop in your mouth when you crunch ’em, best tasting seaweed in the world. Only get it on a few islands in Okinawa, I heard.

Mary held out the box of stuff from Dwayne, and I took it and opened it up. Weren’t nothing valuable inside, just mementos. A dented Zippo inscribed with the name of a mission we were on, don’t know what happened to mine. Rusty old pocket knife with a chipped blade. Medallion from the 1964 Tokyo Olympics. Tie tack in the shape of a torii gate. Battered license plate, “Keystone of the Pacific.” And a mess of dog-eared black-and-whites.

One was of Dwayne and me getting into a sukoshi cab. Must’a been round ’65, probably head­ing over to the Castle Terrace Club. Gawd do I remember — two steak dinners for a buck every Wednesday night.

As I was thanking Mary for all these memories from Dwayne, some more chow land­ed on the table. Raftei and Negi Goma-ae (¥500) — raftei is your Okinawan pork, simmered for hours and hours, soft enough to make a Texas roadhouse barbe­cue chef blush. Here it was shred­ded together with big fat Japanese green onions. Then some Ji-mame tofu (¥650), a kinda Okinawan tofu made with peanuts, snow white, kinda like custard but not sweet.

I had another Sakimoto, but Mary was still working on her Rakuen. “You know, Mary, this is good chow and all, but it’s not really Okinawan,” I observed.

“They call it Okinawan fusion, Charlie. Part Okinawan, but part something else. Like me, I guess.” When she was a kid she used to wonder whether she was American or Okinawan. “After being in Tokyo so long, I’m really just a Japanese now.”

We finished up with okoge dish, what they put blocks of really hot crispy rice into soup and it sizzles up. In it were clams and aasaa, which is another kind of Okinawan seaweed, light and feathery, briny ocean flavor. Plenty for two, only ¥950.

The food at Aka is part Okinawan, and a little of every­thing else. Charlie Jake sez one thumb up, and if you’re familiar with Okinawa and like Awamori, two thumbs up.

Mary said she almost never eats Okinawan food these days. Didn’t really eat it much as a kid, either, what with her daddy being American and all. “Nowadays, my life is purely Japanese, even though I was raised as an Army brat.”

“Any American friends in Tokyo, Mary?”

“No, not really. I hardly ever speak English these days, except when I meet daddy’s old friends. But almost every day I hear English — usually Americans speaking together on the train going home from work. You wouldn’t believe some of the things I hear the guys talk about. They just go on as if they have no idea I can understand every word.”

Somehow, Mary’s American childhood is a lot like what her daddy Dwayne left me — a box of memories.