I can’t exactly remember the first time I was taken to the Lipo Bar in the Capitol Tokyu Hotel, but at the time, the name didn’t seem peculiar at all. Of course, this was back in the days when cos­metic surgery procedures were the secret of the rich and famous, and Lipo wasn’t the snickering suffix it is today.

But then, the kind of people who take an active interest in Asian history and culture always know who Li-Po was. And it was he who the Lipo Bar was named after. And a classy name it is, for Li-Po is known as the “Drunken Poet” of 8th-Century China.

For some reason, world-class hotels opening up in Tokyo these days don’t seem to have the same kind of sophisti­cation when naming the bars they contain.

While poets are probably the least likely to be seen here, the Lipo Bar does attract quite a fascinating, and intriguing, clientele. It is perhaps the clos­est drinking place to the Diet building, the back of which can be seen from the back of the Capitol Tokyu Hotel, where there is a small drive-in entrance that affords quick access to the Lipo Bar.

Perhaps it has been this fea­ture, along with the proximity, that has made this classy basement hideaway a perennial favorite of politicians and, more interestingly, the sort of people they attract.

On visits over the years I have seen the entourages of sev­eral politicians. While the politician himself usually leaves after about two drinks, his aides invariably hang around, going into deeper conversation with various kinds of people – not only those working for other politicians, but also entertainers and, yes, those who could only be underworld bosses.

Increasingly, I wonder if this establishment is actually some sort of branch of the Diet, since it seems that a fair amount of deal making goes on here.

Perhaps the Lipo Bar is the interface between legitimate political activity and the types of relations that involve those who prefer to stay out of the public eye. There are no windows, and there are several cor­ners out of view. This means that discretion and privacy are the virtual cocktails for which the Lipo Bar may be most famous.

Fortunately, the real cock­tails they serve are truly worthy of attention. I usually have a Tom Collins (how ’60s!), though people with whom I have gone there are usually amazed by the selection of whiskies.

Once a friend ordered some drink called an Alaska, which was made with gin and Galliano — I failed to see the connection with the frozen north, but the cocktail was so good I got one for myself.

Like many hotel bars, they have a few original cocktails. One is the Penny Lane, named after the Beatles, who stayed in the hotel during their first Japan tour in the 1960s. I’ve heard there’s a picture of them somewhere in the bar, but I’ve never had the urge to look for it.

Drinks here average between ¥1,200 and ¥1,500; not cheap, but once you are sitting in the quiet splendor of this elegant bar, the price seems right. They are now serving several different kinds of big, bright cocktails made with fresh strawberries for ¥1,500, until the end of March.

The Lipo Bar also has live music nightly except Sundays from 8 p.m., usu­ally by foreign pianists who coax requests from the audience. There is a music charge of just ¥500. Some of the guys I’ve seen there are quite good, and a thankful change from the prim young Japanese women one often sees at the keys in so many Tokyo hotels.

The decor of the Lipo Bar is pure 1960s modern Japanese — with expansive wood sur­faces and horizontal lines. 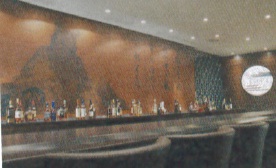 Of course, a representa­tion of a full moon — which was a frequent subject of Li-Po’s poetry — occupies a cen­tral place behind the bar. This is all no coincidence, as the Capitol Tokyu Hotel opened a little more than 40 years ago as the Tokyo Hilton, and the look of the Lipo Bar represents a decidedly Western take on Asia at the time.

For adults, the Lipo Bar is ideal for an intimate romantic encounter. Surprise your date by taking him or her here for a drink. Who knows, you may strike some kind of deal, one which may or may not require a bribe.