Maybe you’ve seen the JR ski television ad on the Yamanote Line, too. A magnificent black-and-white ostrich is skiing downhill very fast, very nimbly, doing leaps and turns in perfect formation. For a moment, you think it’s the most natural thing in the world for these long-legged birds to be on skis. You laugh, and then the message hits home: If an ostrich can ski, so can you. And so can your children.

“In many parents’ minds, it’s the fear fac­tor that prevents them from allowing their kids to ski,” says Chad Stewart, a Canadian ski instructor who operates Aurora Outdoor Adventures in Nagano Prefecture. “Kids have no fear. The most cautious stu­dents are adults.”

Catering to a growing num­ber of family and international school ski trips, Aurora is one of a growing number of schools owned and run by certified foreign instructors that are making it easier, and far more pleasura­ble, to learn to ski in Japan.

“After five days of lessons, some kids will still be on begin­ner slopes,” says Stewart. “However, recently I took out three young brothers from Indonesia who had never seen snow before. Because of the sib­ling rivalry, they were pushing each other pretty hard to ski.” For beginners, Aurora starts at the most basic slopes and at first they focus on learning to stop. “It’s the most important thing you need to do in skiing,” Stewart says. “Learning how to retrieve lost poles after you’ve fallen is also quite an important skill and helps kids learn balance and movement while wearing skis,” he adds. Children are taught through games and practice.

“By the end of five days of les­sons, these brothers were doing consistent turns on solid interme­diate slopes,” Stewart adds. He says learning to ski in a group has its advantages, as it’s more social, and kids love to be with their friends and make new ones.

“When you have just spent the day falling a hundred times, it’s nice to leave the hill with a positive experience,” says Stewart.

Patrick Newell, the founding director of Tokyo International School, would agree. He described TIS’s first annual ski and snowboarding trip to Cosmo Villa, in Katashina-mura, Gunma, as a diagonal classroom in the snow.

Fifth and sixth grade stu­dents took ski or snowboard lessons each morning. A big part of the adventure was being in balanced natural surround­ings while being challenged on the slopes.

“Eighty per cent of our stu­dents are ex-pat kids, and from a cultural perspective, providing as many real Japanese cultural experiences as possible is very impor­tant since most of our students live in Japan for only about three years.

“Most of our students haven’t stayed in a minshuku (Japanese inn) run by a Japanese family, or shared a room with other students while sleeping on tatami mats. They also bathe daily at an onsen and taste various Japanese foods.”

Over New Year’s, I watched my 6-year-old daughter Mirai shove her toes into ski boots for the first time. My daughter’s two-hour lesson ended with a triumphant smile, as she showed me how she could now plow her skis to a stop. 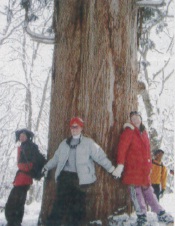 Of course, learning to ski in Japan is a rural adventure, a lesson in geography, and a serious investment. I must confess I was anxious to see these ski lessons pay divi­dends even before I got on the Shinkansen. But a pale view of the mountains puts it all in perspec­tive. It would be a pity to leave all that splendor just for the ostriches.

There are children’s ski centers at most ski areas these days, with some more set up than others, with a magic carpet (ski escalator instead of a chair lift), sledding, tubing, characters in costume and other events.

Most areas will have a chil­dren’s day, with free or half-price tickets, and kids under 5 ski for free all the time.

Aurora Outdoor Adventures in Omachi, Nagano, caters to the foreign community of Japan and tourists from overseas. All three Canadian-licensed instructors give group and individual lessons, to skiers 3 to 70 years old.

Getting there: Take the train from Shinjuku to Matsumoto. Change in Matsumoto for a Hakuba-bound train. Approximate traveling time: 2 1/2 hours.

Getting there: Take the train from Shinjuku to Matsumoto. Change in Matsumoto for a Hakuba-bound train. Approximate traveling time: 2 1/2 hours.

Getting there: Take the Asama Shinkansen from Ueno to Nagano, and then change for the bus to Shiga Kogen Onsen.The school is affiliated with Riverside Hotel, a traditional Japanese-style hotel. ¥9,000 per day (adults) and children charged 70 percent. Weekday rates slightly reduced.

Snowshoeing is a great way for the whole family to discover the winter wilderness. “As long as you can walk, you can snowshoe,” says Dave Enright of Evergreen Outdoor Center in Hakuba, Nagano.

Whether you are using snow-shoes for winter orienteering with school groups, family treasure hunts or just exploring the area, it’s a lot of fun for children and adults alike.

Snowboarding. “The key to learning to snowboard is balance and getting good at turns,”explains Enright, an instructor in the Hakuba ski area. He says kids can pick it up a lot quicker than skiing.

“In about four days they can be pretty comfortable going down the mountain. With skiing, it’s harder because there are so many different techniques. You go from the simple plow to stem Christie to parallel turns to carving…,” he continues.

Enright advises against snowboarding for the very young, “Just as you don’t want a young child weight lifting, you also don’t want a 5-year-old standing in a contorted way. The body position in snow-boarding can be awkward.”

Cross-country skiing is a great way to stretch the legs and see the winter forest in a fun atmosphere. You can exert as much or as little energy as you want, either walking, gliding or even skating on the snow with your XC skis. It is always best to head out with an instructor or guide to get pointers on technique so you can enjoy it to the fullest.