Down in the Valley

The Yoshino River in Shikoku features some of the most thrilling white water rafting in Japan—and much more—for those who make the journey.

Saturday and it’s raining again — surprise, surprise. Being rainy season in Japan, it is only to be expected. As a surfer, I’d usually be off to the beach in search of a few waves about now. But today is a different proposition, as I am heading to one of Japan’s most powerful rivers (gulp), the Yoshinogawa, to participate in an all-day rafting expedition organized by M.O.C. (MontBell Outdoor Challenge).

The Yoshino River is located on the island of Shikoku, just south of the main island of Honshu and the smallest of the four principal islands of Japan. Literally translated, Shikoku means “four countries” and, in ancient times, they were known as Awa, Sanuki, Iyo and Tosa. These days their prefectural equivalents are Tokushima, Kagawa, Ehime and Kochi.

The Yoshinogawa runs deep through the mountains in the center of Shikoku — a remote region near the border of Tokushima and Kochi Prefectures. Its power is attested to the spectacular deep gorges of the Iya Valley that have gradually been carved over time.

When I arrive at the river, the MontBell crew is busily preparing for the day’s outing. My guide, Motohisa Yimauchi, an experi­enced kayak dude, is clearly excit­ed. He informs me conditions are good – maybe a plus-four grade. I don’t know exactly what that means, but it sounds a bit omi­nous to me.

My apprehension is eased as we get ready to go. All the neces­sary equipment is provided: hel­met, life jacket and wetsuit. Even a long-sleeve fleece to wear under your wetsuit for additional warmth. All the gear is in top-notch  condition  and,  more importantly, Yamauchi-san and the rest of the MontBell team insure everything fits correctly.

Before heading down to the river, we are given a thorough briefing on how to prevent acci­dents and what to do in case of an emergency.

The rafting course runs from Oboke (meaning “big danger”) Canyon through to Koboke (“lit­tle danger”) Canyon, taking in six major rapids. Before hitting the whitewater, we are given plenty of practice in paddling, gripping and floating techniques. We anticipate the thrill of shooting the rapids but find there is also time to fool around and have a leisurely dip in the river.

Other than the occasional person overboard (myself includ­ed), our trip passes without inci­dent. From the satisfied grins on everyone’s faces, I can see that MOC’s blurb rings true: “A raft­ing experience on the Yoshino provides a ‘psycho’ thrill, (‘saikou’ being Japanese for ‘best’) in which the euphoria of the moment allows a person to return to a child-like state of innocence.”

Rafting is not the only activi­ty you can enjoy on the Yoshinogawa. For those who pre­fer to tackle the raging waters solo, kayaking tours are also available. If that sounds a little too extreme for your liking, or if you have little ones in tow, you might consider a ride in a flat-bottom motorboat.

These boats are a great way to feel the power of the river and the immensity of the valley. The boats are even fitted with straw matting (tatami), so don’t forget to take off your shoes as you board!

Considering the Iya Valley covers such a vast area, outdoor activities here are not only con­fined to the water. There are numerous excellent hiking trails as well, complete with mountain huts (yamagoya) along the way where you can bed down for the night free of charge. If you’d like to tackle some of the peaks, I rec­ommend consulting the Lonely Planet’s Hiking in Japan.

The valley is well known in historic terms too. This area was so inaccessible 800 years ago, the feuding Heike Clan took refuge here while escaping retribution from its rivals, the Genji Clan. The legacy of the Heike occupation remains to this day in the bridges constructed of inter-woven vines known as kazurabashi. (If the Heike came under attack, the vines could be slashed to facilitate an escape.) 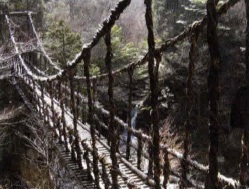 As you explore the area, crossing the Iya or the Oku-Iya Kazurabashi bridges is quite a thrill. You must watch your foot­ing, as there are gaps between the slats underfoot, and the bridges sway somewhat precariously as you pass high over surging waters. Should you venture to the Oku-Iya Bridge, you will also find a unique “flying fox” carriage span­ning the river. It can be very handy should you decide to make-use of the nearby camping ground.

If this all sounds a little too daunting for you, don’t be deterred. The immensity and beauty of the Iya Valley can still be enjoyed without exerting so much energy. For an understanding of the evolution and unique geology of the area, the Lapis Oboke Museum is highly recom­mended. The well-presented dis­plays are also labeled in English.

There’s plenty of fine cuisine to experience in the valley too. Iya is famous on Shikoku for its soba noodles. You might like to try some with edible sansai (moun­tain plants) – tasty and nutri­tious. The sweet fish known as ayu, from the Yoshino, is succu­lent and highly recommended.

Ironically, “iya” means “no” in Japanese. But if you venture to Shikoku, be sure you don’t say no to the Iya Valley. This enchanting area, full of things to see and do, is a must see for anyone that makes the journey. With the construction of a number of bridges connecting it with the mainland, accessibility to Shikoku has improved noticeably in recent years.

Located halfway between Tokushima and Kochi, Iya can be accessed easily from both. By road, the quickest route is via the expressway. Coming from Kochi, exit at Otoyo IC, while from Tokushima you will need to exit at Ikeda IC. Route 32 will lead you into the Iya Valley from there.

It is also possible to get to the Iya Valley by train. Take Awa-Ikeda-bound trains from either Kochi or Tokushima and enjoy the scenery as you go.

The Yoshino River in Shikoku features some of the most thrilling white water rafting in Japan—and much more—for those who make the journey.