A Day of Rest

And if you’re at the greatest Sunday bar in the world—Cody’s in Chicago (corner of Paulina and Barry)—you can also have pool, darts, board games, da Bears, free homemade food and even boccie ball out back if the weather’s nice.

I once got stuck in a four-hour chess game there, which began minutes before my friends and I were supposed to start our long drive back to Detroit. If we had been at any other bar, I would have been left behind after one beer. But since we were at Cody’s, all I got were periodic, half-hearted scold­ings.

So where can a midwestern boy sojourning his way through Tokyo get his Sunday bar fix? Clubhouse in Shinjuku. No bar that pays Tokyo rent can offer all that Cody’s does, but Clubhouse captures the mood. And though it isn’t free, they have the best Thai chicken curry in Tokyo.

It bills itself as a sports bar, but Clubhouse is much more than that. A lot of  the “sports” bars in Tokyo are really soccer bars. If you don’t have a funny hairstyle and an Arsenal jersey, you’re treated like a Russian sailor in a sento.

Clubhouse may have been conceived for sports fans, but it has also become a favorite for aficionados of cozy neighborhood bars. And all types are welcome, regardless of nationality, socio-eco­nomic standing or feelings about soccer. I’d bet it has the most diverse clientele of any bar in Tokyo.

Sports, of course, is the draw for many, but even Clubhouse’s sports crowds represent a cross-sec­tion of Tokyo’s populace. On a recent visit we witnessed an impres­sive exhibition of international diplomacy when bar owner Gama somehow managed to please fans of Kenya, Sri Lanka, India, and Australia when two big matches were being aired simultaneously.

Always on the lookout to take advantage of someone in a fix, I asked Garna if he could put an NBA game on one of the screens. He thought about it for two sec­onds and then said, “Sure. I think we can work something out.” My bluff called, I told him I was just messing with him. Ever the gra­cious host, he feigned amusement.

Another example of Clubhouse’s legendary hospitality is the staff s willingness to record any televised game it can pull in on satellite and then play it back for you the next time you’re there—as long as the screens aren’t all spo­ken for. They’ll even set their VCR to record games aired when Clubhouse is closed.

Not even Cody’s can match that kind of hospitality.

Don’t let Dan fool you. He and Clubhouse go way back. You’ll find him at his favorite hangout on Sunday and every other day of the week.

I’d describe it as burly on the outside, boyish underneath. Like a frat house on game day, girls are welcome but the only attention they’ll get is a beer refill because all the guys are watching the game.

At Clubhouse, there’s usually a game on. It’s either football, or the other football, or cricket, or sumo, la la la. Gama, the hunky barkeep, plays on a few aigby teams himself. Recently, it was standing room only for the Cricket Cup or some such madness. And they’ll be showing Six Nations rugby till the leather falls off the ball.

Why do I go there, you might ask. Because Garna is a doll. His curly strawberry blonde locks and stealthy sweet demeanor are a potent combination. He shyly exudes a warning that “you’d better behave in my bar,” but he’s so gosh-darn polite.

Two little-known facts I am not embarrassed to admit: Prior to touchdown in Narita, I had never eaten curry or fish-and-chips. Yes, astounding I know. After some-odd years in Japan, I’m still cultivating a palate for the piquant national dish of England, but I have truly had my fill of fish and chips, or french fries, or fried potatoes— whatever you call them, you can keep them.

And though Clubhouse serves plenty of rugby-soccer-cricket boy fare, it also features a tasty Greek salad and similar dishes for those of us who opt not to eat with our hands.

Everyone raves about the fabu­lous Thai chicken curry, but I have yet to take the plunge. Just when I work up the nerve for the house special, Dan (who can wolf down half a plate before I have unfolded my napkin) starts perspiring, hic­cupping and rolling his eyes toward the ceiling.

Despite the tinkling chorus of “what’s the score” that rings out regular as a heartbeat, Clubhouse is fun. Garna is one of those rare males who can look at you, talk to you and watch the game at the same time. You may think, “That isn’t so hard. Teachers do that. Mothers do it all the time.” Yes, that may be true. But men cannot look at their wives or girlfriends and converse while the game is on; even commer­cials can pose verbal road­blocks. 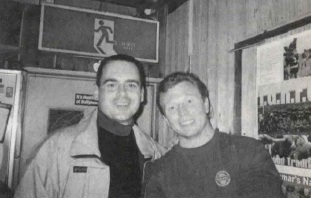 I encouraged Garna to share his gift with his fellow man, but he just shook his head and gave me the same “why are they bothering me” half-smile that Dan’s goofy NBA prank got.

So, ladies, if your game is bas­ketball, baseball, hockey, whatever, you’ll always find a home and a sports family composed of burly, yet complaisant regular blokes at Clubhouse. A notion that’s sexy in its way.

All points bulletin for beer afi­cionados-in-training: Being A Broad is hosting a Beer Tasting on Saturday, Mar. 29, at Hobgoblin in Roppongi. Led by Tokyo’s own “professor ale” Bryan Harrell, atten­dees are sure to be drunk and “hoppy” by sundown.

I’ll be there but I won’t be don­ning my usual beer goggles. In defi­ance of popular opinion regarding my frail willpower, I have given up liquor for Lent. Heaven help me, I went on the wagon Mar. 5 and I shall not imbibe until Easter (or sundown Good Friday, depending on how things go). But remember, Sunday is a day of rest.

Clubhouse
Address: 3F Marunaka Bldg., 3-7-3 Shinjuku
Tel: 3359-7785
Hours: Daily 7 p.m.-midnight or later
www.clubhouse-tokyo.com (map available)
Directions: Near the intersection of Shinjuki-dori and Meiji-dori. Down the alley from Mizuho Bank and on the right.