Food & Drink
TOPFine scenery, but the food at Roy’s Cafe will bring me back
Food & Drink

Fine scenery, but the food at Roy’s Cafe will bring me back

“For some reason, Charlie Jake, they insisted that I bring you along,” whispered Kumiko while her lady friends across the table chattered in Japanese. So “for some reason” here I was, in this slick, fashionable bistro kinda place, reminded me of New York City, in the company of three lovely women almost young enough to be my grand-kids. You can imagine the looks I was getting. Not to mention the boozy wink I got from one big ex-pat fellow about 40 when we passed each other in the hallway going into the john.

Kumiko set this evening up for two of her friends, who were visiting Tokyo. They’d been wanting to come here since they’d seen a magazine article about this place, Roy’s Cafe, which opened a year ago in the Mori Tower in the Atago Green Hills complex, a hop, skip away from Kamiyacho station.

They’d also been wanting to meet me since they’d heard that Kumiko had an American boss. Who was single. Guess they were too shy to ask Kumiko anything about that, ’cause if they had, they would’ve learned I was sin­gle only because my wife of 48 years passed away a few years back. So instead of the dashing young executive type they’d imagined, they found themselves sitting across from some old coot from Texas, 73 years old.

But that’s where the disap­pointments ended because the food at Roy’s Cafe grabbed most of our attention for the rest of the evening. First we had to narrow down our appetizer choices from the astonishing list on the menu. Had something for everyone, from dainty raw-fish carpaccio to these honking spare ribs with Szechuan sauce glaze.

While the ladies hemmed and hawed, couldn’t make up their mind, I was developing a power­ful hunger, so I took the initiative and ordered two. 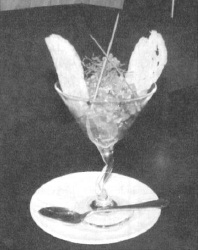 Since the owner Roy Yamaguchi opened his first restaurant in Hawaii, I decided to start there with the Lomi Lomi Tomato Martini with Poke and Avocado (¥780). The aroma of top grade sesame oil greets you with this marinated salad of finely chopped raw tuna, avocado, green onions and something faintly spicy which may have been wasabi. Since the ladies could agree on spring rolls, I got Fresh Spring Rolls with Teriyaki Salmon and Vegetable (¥980).

What a Main Street parade of textures and colors, with crispy cucumber sticks, flaked teriyaki salmon standing out inside the well-wrapped rolls that didn’t fall apart when you tried to eat them. Came in a sauce littered with fresh bright salmon eggs, briny yet sweet.

Since they do wonderful things with fish here, we decided to stick to the seafood. As usual, Kumiko went all google-eyed over the wine list and ordered up a crisp New Zealand sauvignon blanc from Cloudy Bay.

The ladies kept on ordering, and more things came out than I could describe in the space Corky gives me. The most memorable pasta was the Spinach Gnocchi with Scallops and Crab Cream (¥1,480). Gnocchi’s just a fancy Italian way of saying little dumplings, and these were the most gloriously soft and chewy ones, and not at all sticky, joined by nubs of baby scallops and a crab cream sauce so rich and deep tasting it would make my cousin Huey from New Orleans turn red as a beet. You just gotta get a bas­ket of their piping hot bread (¥350) to rescue the remains of this sauce before they take the plate away.

My favorite among all the great main dishes was the Grilled Shutome in Thai Coconut Basil Sauce (¥1,780). You got your two perfectly grilled fillets of tender white shutome fish over a big slab of eggplant, which you can use to soak up the dee-lightfully aromatic pale green sauce that fills the plate out. Pass me over some more of that bread, please.

Wouldn’t you know it the ladies all broke out in squealing fits when the waiter shoved a bit plate of desserts in front of them. Gosh darn if I didn’t break down along with them, and get this Chestnut Cream Tiramisu (¥650) that turned out to be a creamy masterpiece right up there with the banana cream pie my Aunt Earlene used to make. It was mostly light chestnut cream, not too sweet, with a thin layer of liquored-up sponge cake down there. It was all topped with cocoa powder emblazoned with pow­dered sugar palm trees, along with fat shavings of fresh coconut (now when’s the last time you ate that in Tokyo?).

The service was just how I like it—there when you need them, gone when you don’t. All the while, they keep your water glass full, and silver on the table. ‘Course I couldn’t make any sense out the music they played, so I yanked out my hearing aid when Kumiko and her friends let up on the talk and really started chowing down.

If you ever go to Roy’s Cafe you’re not likely to see any old horse traders like me, ’cause it seems to be the territory of beau­tiful women, either in small groups, or with some guy. About 40 years, 35 pounds and one mar­riage ago, I would have been a regular in a place like this. Great chow, good wine, and fantastic scenery, if you catch my drift. What more could a guy want?

Charlie Jake says two thumbs up. And if you’re a young buck, dress nice and don’t forget to bring your business cards. ‘Course, I’ll be back—for all that great chow.