Sotec in Yokohama: company on the way up

YOKOHAMA—Anybody who has spent any time at all in this country knows that it is a tough place to do business. It is tough on outsiders—on foreigners. It is absolutely brutal as between the Japanese themselves.

My admiration is 100% for those individuals who have made the grade on their own. This applies above all to the giant-zappers— those that started up from scratch and somehow made it in industries where Japan already leads the world and has strictly no need of newcom­ers (being God’s own home to car­tels). To best world-beating enterprises on their own turf is a huge task. It requires (a) a tremendous effort of will, and (b) lots of luck.

I have never met Soichi Obe, 50, the founder of Sotec, a Yokohama-based PC or pasocon company. I am sure I will one day. But what I can say is that he has had his share of luck. He must also be a lionheart. Imagine building up a business of his type in this country with NEC, Matsushita, Sony, Toshiba, Hitachi and Sharp breathing down his neck. I wouldn’t dare. 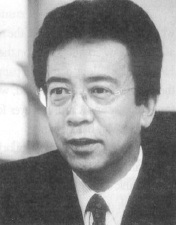 Obe-san founded this business in 1984 after some preliminary struggling around with other outfits. He got bold and named a firm after himself. He used his initials S and O and added on “tec.”

Sotec imports all its PCs from Taiwan and from Korea. The machines are designed in Japan, ordered overseas and imported. That is how Obe-san and his rapidly growing staff of 220—his payroll is still absolutely tiny, as compared with die tens of thousands working for Matsushita or the other giants— got their costs down to a level where they could compete here. This was explained to me by Masayasu Ozeki, a board member at Sotec.

“Ours is a ‘fabless’ operation,” he told me in an interview at the company headquarters in Sakuragicho, Yokohama. “Do you know what that means?” Yes, I said. It means that Sotec does no manufactur­ing—no fablicating—anywhere in Japan. The company headquarters is the brain of a corpo­rate body that has its limbs overseas where its dedicat­ed suppliers are.

As a matter of fact, this com­pany is a hybrid. It is Japanese and Korean. Thirty percent of the company is Korean-owned, approximately, he said.

My interview with Ozeki-san took place at the fairly utilitarian head office on the 36th floor of the Landmark Building in Sakuragicho. After our chat, which took place in the boardroom, my host took me to the elevator to say goodbye. If I wished, he said, without pressing me, I might like to stop by the Sotec showroom on the third floor of the building.

I might do just that—check out the showroom, have an early lunch, and head back to Tokyo, I decided. I made a mental note that the Sotec exec had left it up to me. In many, if not most, Japanese companies they would have insisted on escorting me to the showroom. I would have been mollycoddled and befuddled by the traditional escorts: a girl in uniform and a man in a suit prefer­ably carrying a f — clipboard. Sotec was different.

So were the products. I walked into the showroom totally unprepared for what I found. Simply the crown jewels. So take the Toyoko Line down to Yokohama from Shibuya—that’s a ¥290 fare—walk the 500-meter walkway from Sakuragicho Station to the Landmark Tower— and feast your eyes.

The stuff Sotec has on show is mesmerizing (using this adjective in my copy for the first and last time, thank you dear editors for leaving it in).

Here is my list of jewels to take home:

■  An “Afina Style” PC that can “do everything”—run television, play your CDs, pick up on the radio—for ¥138,000. The image-bright and sparkling—struck me as a summer’s day. 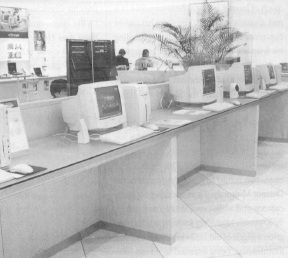 Mind you Sotec is still a tiny company. Its semi-annual sales to September last year totaled ¥45 bil­lion ($400 million some). That is a tiny fraction of the turnover at one of the giants in consumer electronics in this country. The company, however, concentrates entirely on its PCs. It does absolutely nothing else. I think that is a key to its success.

The other thing is that indis­pensable element of luck, I men­tioned. The turning point in Sotec’s 17-year history—an episode that its executives don’t talk about with great joy (but then I think they should cheer up)—came a couple of years ago. All of a sudden little Sotec was sued by Apple for infringement of the iMac design. I am writing this on an iMac now, it has one of diose lemon green translucent boxes. Nothing wrong with an iMac; mine is friendly. However, to have been alleged to have copied this box was traumatic for the company. Or so I gathered from Ozeki-san. He became very stiff and squared his shoulders when I raised die subject, as if to say: here we go again, okay, okay.

However, this is what made Sotec a name to conjure with, as far as young Japanese are concerned. That’s right Being sued by Apple— Sotec settled out of court for ¥10 million ($90,000)—put ’em on the map. Without that lawsuit, in all honesty, the company would not have shot to national recognition— for the record Sotec denies copying the Apple design. Ozeki-san said that the company settled for a nomi­nal payment to bring a halt to cas­cading lawyers’ fees. “The legal charges threatened to eclipse any damages by far,” quoth he.

“Sure, but being sued by Apple was the best thing that ever hap­pened to Sotec,” commented Kazuo Kurosawa, a young man on my staff. “It put them on the map. They were no longer the cheap alternative PC maker.”

The way I see it Sotec emerged from the fray a couple of years ago with its leadership steeled in fire and with a reputation for quality. And what matters more than reputation? Nothing.