Casting about for something to give to friends who were to entertain us at their stateside home for several days, we decided the gift should be some­thing impressive and different.

Clifton Karhu’s woodblock prints make fine presents but had become a bit too pricey. We dismissed happi coats and those dreadful black velveteen jackets with a dragon and “I love Japan” emblazoned on the back as passe. Platform geta won’t fly, my young wife says.

Finally, one day while cutting through the Imperial Hotel I spotted a set of eye-catching coffee cups with this wild art deco design — an off-center maroon, yellow, and light blue disc pattern on fine Noritake china. On the bottom of each cup was the name of the designer: Frank Lloyd Wright.

Wright the architect? Right. Frank Lloyd Wright, often described as a temperamental and difficult American, designed the second version of Tokyo’s Imperial Hotel, which opened for business on Aug. 31, 1923. The next day, at 12:01 p.m., the Great Kanto Earthquake struck, devastating most of Tokyo and Yokohama. The huge quake, measured at 7.9 on the Richter scale, was blamed for the deaths of 142,807 people and the destruction of 576,262 buildings. (You could look it up.) 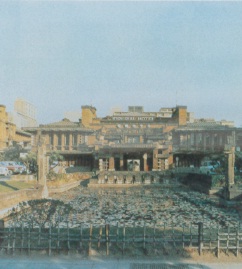 Wright’s Imperial survived, floating safely atop Tokyo’s cheese-like subsoil, and gained instant inter­national fame. Less remembered is that the hotel served as a center for relief work for several weeks.

The new hotel was weird and wonderful, a short, square-shouldered stone edifice kneeling behind a large lily pond. In truth it looked more Aztec or Mayan than Japanese, lending credence to a story that the Wright design was really for a resort hotel in Mexico that never got off the drawing board.

For 44 years, the Wright Imperial captured the imagination of its guests and passers-through-and-by. It was an Asian mystery, produced by Hollywood, that featured sleek women in cheong sam attending Tokyo’s brightest parties while dapper diplomats, foreign agents and correspon­dents conspired, then disappeared down narrow passageways. Marilyn Monroe and Joe DiMaggio honeymooned there, German journalist Richard Sorge intrigued there before being executed in 1944 as a Soviet spy, and Indonesia’s President Sukarno slipped in his girl friends through a side entrance.

Wright personally chose the porous oya stones for the hotel’s construction, and also designed the furni­ture, the murals, the lights, even the glasses and the matchboxes—and the Cabaret pattern chinaware that included my gift cups.

The current version of the Old Imperial Bar, on the hotel’s mezzanine floor, features Wright-designed tables and chairs. The atmosphere is definitely 1920s, with perhaps the only missing item being Somerset Maughn, in one of those vanilla ice cream suits, sitting in the corner.

Imperial historians note that Wright’s Imperial opened three years behind schedule and many times over budget. But it survived fire, recession, the Pacific War and occupation and a series of quakes until 1968 when the main building was visibly sagging and it was taken down. The current steel-and-glass Imperial opened in 1970.

According to Ignatius Cronin, director of the Imperial’s international public rela­tions, part of the Wright-designed chinaware was brought back last year in loose associa­tion with the millennium and the hotel’s 110 year celebration. “We wanted something that would draw on the history of the ho­tel,” Cronin said.

Besides the coffee cup set at ¥4,000 yen, the selection includes a tea cup and sau­cer set (¥5,00), a large tarte platter (¥3,800), and an oval-shaped cake plate (¥2,500), all with the striking polychrome pattern. Cronin notes that on the coffee mug there is “a big red dot right where a woman’s lips would touch the cup.”

The chinaware is sold inside the Imperial Hotel in Tokyo and Osaka and as hikidemono or return-wed­ding gifts at major department stores in Tokyo. Noritake also sells the Wright pattern at its store in Tokyo.

“I have always urged the management to recon­sider the marketing value of Frank Lloyd Wright and the history of the hotel as it relates to Wright. It is a one-of-a-kind heritage,” Cronin said.

Other Wright-designed items such as silver tea and coffee pots could be the next items to go on sale.