If you ask anyone in this town where to go to hear live country music, chances are they will know of one place—a special little club they feel is unique to all of Tokyo. Well, hold onto your cowboy hats and get ready for some great news, all you country music fans out there, for not just one, but eight country music clubs gracing our fair city are about to be revealed to you.

Mr. James is probably the best known of all country music clubs in Tokyo because of its great location smack on the corner of Roppongi Crossing. It is the namesake of its original owner, Jimmy Tokita, one of Japan’s first famous country singers.

The atmosphere at Mr. James is lively and every­one is seated together, friendly style, at long picnic tables and benches. During a recent visit, I spotted famous guitarist Takeshi Terauchi and, a time before that, John Lone of “The Last Emperor” fame.

Various groups are featured nightly except Sunday from 7 to midnight. Cover charge is ¥1,500; beer and mixed drinks run about ¥800. Bottles of booze start at ¥10,000. Snacks available.

About halfway between Roppongi Crossing and Nishi Azabu is a laid-back little spot with an atmo­sphere very similar to a 1950s New York Creenwich Village coffee house, where mellow country music can be enjoyed in the back room.

Hearing the song “Buttons and Bows” (East is east and west is west, and the wrong one I have chose) when he was very young gave Oshima-san, the owner, the inspiration to open Bronco, which he did 24 years ago. Western decor is topped off with a giant picture of the legendary Hank Williams at the entrance. Fa­mous Japanese country singers such as Kuroda Biji — “the Japanese Hank”—are also represented. When you walk through the swingin’ doors of Stonefields, you will immediately be greeted by Sam Ishihara, owner and “creator” of this “Nostalgic Ameri­can Country Music Saloon.” He will seat you on a comfortable couch and introduce you to the other C&W fans in the room, resulting in the feeling that you’ve just dropped by a good friend’s house for a friendly chat.

Some nights friends play music with Sam. (He keeps extra instruments around, if you’re interested.) But Sam will pick up his guitar any time and sing you a tune. And he sings with the soul of a true cowboy. He really feels a song, whether it’s a standard or popular country—or one of the more than 1,000 he has written himself, including the always-popular “I Wanna Drink!”

Stonefields is open nightly except Sundays from 7 p.m. to midnight. There is no cover charge; beer and mixed drinks start at ¥700. Bottles begin at ¥7,000. Tex-Mex snacks.

Nestled in among the glitter, glitz and hostess clubs of Ginza are three (count them—three!) country music clubs. The largest of these is Nashville; it’s also the easiest to find, since it’s located just one small street behind the landmark Sony Building.

This long, narrow room has been featuring “Ameri­can Music Live” for 15 years now. All types of people come here and it’s usually crowded. One reason may be that they feature a “happy hour” with reduced prices on drinks and bottles from 5 p.m. until the music starts.

Walking into Rocky Top is like walking into a little wooden cabin; it’s so cozy with its leather cowhide table­cloths and peanut chopstick holders. When John Den­ver was in town a few years ago, he got up and sang here.

The owner, Mr. Koyanagi, strongly believes that people should have fun. He loves to have foreigners come in and welcomes them with open arms. He also says he offers the best prices in Ginza.

Western Banjo is an experience to visit. This tiny club barely holds 20 people, but features a live band between the end of the bar and the toi­let (which is usually accessible only while the band is on a break). The customer is the star here; the band is here to back up their songs. Sodai-san, the owner, plays drums and other members vary nightly. But several nights a week Chuck Miyagi is on hand for some fine downhome fiddling! Ban­jos and guitars are always available if you want to join in.

In an unlikely back alley in Yotsuya is a funky little country music pub called Pinefield. It’s a tiny little place (scats 10 at the bar and five at a table) and has lots of C&W “things” hanging from the walls and ceiling, including an authentic wheel from the John Wayne movie “Stagecoach.”

Its owner, “Sunshine” Matsuno, is full of personal­ity and it’s easy to understand why he was given this nickname early in his singing career. He simply “lit up the stage.” Periodically he will go to the far end of the bar and sing or yodel a tune or two, accompanying himself on guitar and kazoo. If you wish to harmonize with him or sing your own song, a mike is available.

Sunshine’s “home brews” of bourbon with plums or shochu with dried grapes are prominently displayed on the bar in big glass jars, and his wonderful garlic popcorn is a real treat. 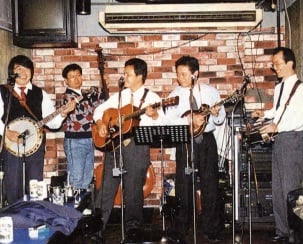 Bluegrass is very popular in Japan, and there’s a place snuggled into a tiny, tiny alleyway in Jimbocho that specializes in it. Called the Bluegrass Inn, it’s been featuring “Finger Pickin’ Good” bands—with names such as “Grass Freak” and ‘Tennessee Studs”—for about 14 years now. It’s pretty small, and the groups are usually fairly large, so when the place gets going, it can really wail.

Live music can be enjoyed from 8 to 10:30 p.m., Monday through Saturday. Although the usual fare is bluegrass, on occasion they add a little variety with a blues or jazz band.

For those of you who need a C&W “fix” between visits to your new favorite country music clubs, listen up. The Top 40 American Country Countdown can be heard on FEN (810 AM) every Sunday afternoon be­tween 1:05 and 5. Week nights tune in between 11 p.m. and 3 a.m., and Saturday nights from midnight till 3 a.m. to hear your favorite tunes. Or get your own country music records, tapes, and CDs at Disk Union, Tel. 3294-2648, in Kanda, or Tennessee.Tel. 3498-1675 in Shibuya.