Clinking glasses, good food, good beer, good prices and a hearty irasshaimase hallmark the latest incarna­tion of Windsor in Azabu Juban. The Windsor name covers two restaurants and a British-style pub all owned and operated by one Michitake Uranuma or “Michi-san” to his customers. Michi-san started his run in the restaurant business 25 years ago when he ‘opened Pub Windsor on the corner where his Windsor cafe now stands. The pub was his attempt to recreate the fun, casual atmosphere of now-defunct Berni Inn, a Roppongi bar where Michi-san first worked. 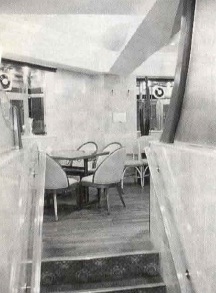 Pub Windsor, though small, drew a steady clien­tele and five years later Michi-san decided to expand his operation. He closed the pub and, after remodel­ing, reopened the Windsor this time as a cafe-restau­rant. The food offerings were items he personally en­joyed: lumberjack pancakes (for which he is now fa­mous), a variety of spaghetti, curries and steaks. Last year Michi-san bought yet more property and ex­panded again. The cafe-restaurant now has a second floor where customers can enjoy shabu-shabu and next door Michi has added a brand-new pub: the circle is now complete.

The food at the cafe is very good and the menu has enough variety to keep a steady base of repeat customers— the acid test of the restaurant industry. Michi’s pancakes de­serve their good reputation—light and fluffy, they fairly melt in your mouth. Some surprises on the menu (besides the pancakes) in­clude: a cream seafood sauce over spin­ach pasta, rice pilaf and an omelet with rice. Best of all, no menu item costs more than ¥950.

If shabu-shabu sounds good, upstairs is the place for you. The set costs a mere ¥1,680 and includes every­thing from tea through dessert. The newly renovated rooms are light and comfortable, making the perfect complement to friendly conversation. Another addi­tion is microwave burners. These special burners only heat the food in the specially designed nabe, so even your children can participate in making shabu-shabu.

While the cafe-restaurant and the second floor res­taurant provide great food at great prices, as well as plenty of reason to visit Windsor, Michi-san’s favorite (and mine) is his new Windsor pub. The pub opened last December and is still new enough to actually smell new. The design was well-planned and offers some­thing for every season. In the winter, or on cool nights, you can cozy up to the fireplace. When mother nature decides to crank up the thermostat, Michi-san will open the entire front of the pub so you can enjoy the outdoors.

In the British tradition, the pub offers more than just a resting spot for your beer. Every table is its own chess or checkers board and Michi will happily pro­vide pieces for those interested in playing. Every self-respecting British pub has a dart board and Windsor is no exception. Windsor is even an accredited JDA (Japan Darts Association) venue and as such can spon­sor tournaments and league matches.

The food is international fare: Fish and chips, spring rolls, fried chicken and shumai. For the very hungry, Michi-san will call over to the restaurant and have them bring over any menu item, except the shabu shabu, until 9:30 p.m. The bar is well-stocked with Heineken and Kirin on tap (the Heineken is only ¥600 for a regular glass).

As with any pub, the best treat is the man behind the bar. Michi-san makes both foreign and Japanese patrons feel at home. If you belly up to the bar, as opposed to sitting at one of the tables, expect to join in with the conversation. Language barriers drop as Michi-san will translate the finer points to all con­cerned. His concept was to create a comfortable, fun place for “people over 50, like me.” He has succeeded in his concept, but you don’t need to be over 50 to enjoy Windsor.