If ever there were a “prac­tice what you preach” story, Lance Lee is it. As representative director of International Gymnastics Club (IGC) Japan, Lee has built his life and businesses in Japan around the “Reaching for the Stars” and “I Can” attitude he passes along to instructors and students in his programs.

Lee began his gymnastics activities for kids in the To­kyo international community in 1980, doing most of the teaching himself with the help of a few instructors. To­day, Lance heads not only ICC, but also The Resource Group (TRG), which handles advanced medical equip­ment, and the African American Association of Japan (3AJ). His is truly a success story.

In the Sept. 12,1980, edition of Tokyo Weekender, we ran a front page story on the beginnings of the IGC, when Lee taught a handful of kids at a few locations in and around Tokyo. Today, the program has grown-to such an extent that Lance has turned over the teaching aspect to 30 part-time instructors who take care of more than 500 chil­dren at seven international schools in Tokyo and Yokohama.

“It’s really grown,” said the 40-year-old native Californian, “and I have some really great people working for me who keep the programs running smoothly and profitably. For example, Hiroko Fukuda (known to all as ‘Ms. Hiroko’) directs the IGC and is my right hand for all activities concerning the gymnastics. Mika Wakabayashi is my administrative secretary for TRG and handles the medical equipment business.”

Ms. Hiroko has run the IGC classes “with all her heart” since Lee gradually diminished his personal teaching activities between 1990 and 1991. Lance says now his role is “to teach the instructors rather than the kids. If the teachers know what they’re doing, the kids will be fine.” 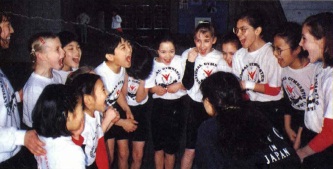 The boys and girls gain confidence by chanting “I Can!” in unison before each class, as they begin “Reaching for the Stars.” Lee says his goal now is to eventually expand the IGC into the Japanese market, but insists the international community is his first priority. He says he’s been approached many times to extend his gym­nastics classes into the Japanese community, but felt the time was not yet right. “I didn’t want to lose any of the quality of the program by spreading it too thin, but it does have the potential to expand, and we’ll be looking into that in the near future,” he said.

When he’s not busy with the IGC, Lee is taking care of TRG business, whose Medical Equipment Deinstallation and Purchase Service, according to their brochure, en­hances the re-use of medical equipment used in a devel­oped nation such as Japan. In many medical institutions, equipment such as CT scanners are being replaced by new units. TRG purchases CT scanners at the time of replacement and exports them to areas that need them throughout the world.

Lance Lee is married to one of Japan’s most re­spected doctors, Dr. Keiko Lee, who operates at three of Tokyo’s leading hospitals. They have four young sons: Lance, 6; Lewis, 5; Lonnie, 2, and Lucian, six months. Dr. Lee has performed her heal­ing skills on many well-known personalities in Tokyo’s foreign community, including Dolly Baker and Joan Shepherd.

Both IGC and TRG are registered companies in Japan, while the 3AJ is a non-profit organization. All three are owned by Lance Lee. The Afro-American Association of Japan (3AJ) is a non-secular, non-political, American non-profit organization based in Japan and dedicated to the betterment of African American business relations worldwide. The 3AJ view of the global economic market is that of an “unknown friend” waiting for an introduction to a responsible and productive group of individuals representing the vast wealth and potential of the diverse markets which are bountiful in African America.

3AJ sees African Americans living in Japan with networks of friends and associates in all fields of business and education. The philosophy of the 3AJ is, ‘The time has come for those of means to join hands across the seas for the betterment of the masses!”