The sudden family of Dick Bush

Richard Bush, a bow-tied, silver-haired leprechaun who manages the Tokyo American Club, grew up thinking he was an Irish-American. “My mother’s maiden name was Hartigan, which is about as Irish as you can get,” Bush said. “All the relatives I knew were Patricks, CCallaghans and Meghans.”

So it came as a surprise when he found out at age 39 that he and his sister were adopted and that both their parents were born in Italy. At the age of 73 in 1992 he discovered he was one of 11 children and had a slew of brothers and sisters in Iron River, a small Michigan Upper Peninsula town of abandoned iron mines.

Until 1958, Dick Bush had lived as an up­per-middle class American. He and sister Bar­bara grew up in Negaunee, Mich. Their father was a bank president, and Dick was educated in Nagaunee and at Lake Forest Academy in Illinois, at the Massachusetts Institute of Tech­nology and Babson Institute.

Bush had worked in Chicago for United Airlines, starting in 1947, married his super­visor and took her place after she quit. He was working as advertising manager of the Albert Lee Tribune in Minnesota in 1958 when his father, John Bush, died in Ann Ar­bor, Mich., where his sister Barbara lived.

After the funeral, Bush took the body to Ironwood, Mich., where his mother Margaret was buried. Walking to his car after the burial, cousin Agnes Reagan said, “He was an amaz­ing man, wasn’t he, Dick? And he never wanted it to be known. ‘Tis amazing how he kept that secret all these years.”

“What are we talking about?” Bush asked.

“Agnes, I don’t know what the hell you are taking about.”

Agnes said, “You’re adopted and your sis­ter is adopted and (she was mistaken here) you are not brother and sister.”

“I was 39 years old. When I got back to Albert Lea and walked in the door, my wife Jean said, ‘What happened to you?'”

Later, Bush called Barbara. She said, “I’m not sur­prised. I had a hunch. But I know we are brother and sister.”

Barbara suggested the matter not be pursued. “Why bother to do anything?” she asked. “We had a mother and father. Let it go.” Dick agreed.

A year later Bush, a B-29 navigator in the Pacific War, said he got an itch to go to Japan. Trouble was, he couldn’t get a passport. “I couldn’t prove I was born. I had no birth certificate. We didn’t know where to look. I must have spent a year calling relatives and even hired two private detectives. Nothing.”

The break came when an aunt gave him a parch­ment envelope done up with ribbon and sealing wax. “Your father gave this to my husband in 1924 to keep for him, and my husband has been dead for years, and now your father is dead. You should prob­ably have this.”

Bush said, “So I cracked the wax, and it was all there. My adoption papers, my sister’s adoption pa­pers, my birth certificate. My name is Tarsi; Richard Anthony Tarsi. I was born in Iron River, Mich.”

With a passport finally in hand, Dick went off to Tokyo with wife Jean and preteen children Mary, Ricky and John, and his mother-in-law. Dick, an engineer by education, got involved in manufacturing and exporting. That eventually led to making recreation equipment for U.S. forces in Vietnam; play­ing cards, cribbage boards, drop forge horse shoes, even eight-feet-deep above-ground rubberized canvas swimming pools.

Bush also took orders from some U.S. companies. “I was the first producer of a stuffed animal radio, a teddy bear-like animal for a novelty company in Chicago. Spring motors for chattering teeth. An out­house radio.”

He became an expert at import-export in Japan and later produced a booklet for the American Chamber of Commerce, telling American businessmen how to export to Japan. “I was shocked at the lack of interest of U.S. companies,” Bush recalled. “Whatever happened to the Yankee traders? Their documentation was lousy. They didn’t make shipments on time and there was no dedication.”

In 1982, Bush, as part of his business, began to represent the State of Washington in Japan and throughout the Far East, developing markets for exports to Japan while helping interest Japanese entre­preneurs with investing in Washington. Five years later he became general manager of the Tokyo Ameri­can Club, a Tokyo institution that provides dining and recreational facilities for more than 10,000 foreign and Japanese members and their families. Previously, he had served as president of the American Club for two terms of office.

In 1992, 31 years after he found out he was adopted, Bush finally decided he would try to learn something about his ancestral family. He wrote to the clerk of a court at Crystal Falls, the county seat for Iron River, and asked for information about Conchetta Tarsi, his natural mother. He got back a death certificate.

The certificate listed Alice Myefski as the person who informed authorities of the death. “So I thought, what the hell, and I finally wrote a letter to her and said 1 have reason to believe this Conchetta Tarsi might be my mother, that I was adopted and, if they would give me a telephone number, I would call and talk about it.

“About three weeks later, my phone rang here at my desk. And the voice said, ‘Is this Dick Bush?’ I said yes and she said, This is your sister Alice,’ and she started to cry.” 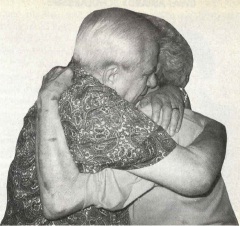 Bush and his second wife, Shizui (Jean died of a cerebral hemorrhage in 1986), flew to Minneapolis last summer, took a plane to Marquette, Mich., then drove another 90 miles to Iron River. There they met for the first time his surviving sisters and bothers: Irma, 86; George, 82; Bruno Frank, 80; Evo, 76; Jane, 69, and Alice, 64. Aldo, Nello and Parker are dead. With Dick and Barbara, there were 11 Tarsi children. Parents Davide and Conchetta were both born in Italy.

The Bushes got a warm, big Italian family midwestern welcome and spent hours talking, eating; even staying up past midnight playing a cut-throat Upper Peninsular card game called Smear. “My broth­ers and sisters are great,” Bush said. There is a strong physical resemblance between Dick and his brother George.

Oddly, none of the Tarsi family said they remem­bered anything about the adoption. Dick did learn that Conchetta Tarsi did some cooking on special occasions for Dr. Ted Libby, Bush’s uncle on the adoptive side, who lived in Iron River. “Uncle Ted delivered all the Tarsi children,” Dick said, figuring the adoption was worked out among the doctor, Conchetta and Davide Tarsi and John and Margaret Bush, Dick’s adoptive parents.

Bush said, “In a small town in the 1920s, to be adopted had to be a stigma. So the adoption was kept secret and the Bush and Hartigan relatives sworn to secrecy.

“I’m still trying to figure out how I feel,” Bush said. “It is quite an emotional thing. 1 am happy as hell in many, many ways. They (the new fam­ily) are wonderful, wonderful people. But I can’t help but look back and compare. If we hadn’t been adopted, Barbara and myself, we would still be in Iron River. I would probably have worked under­ground in the iron mines until the mines closed. That’s what happened to my brothers. They all worked underground. My dad worked underground in the mines.”

Instead, Richard Tarsi grew up as Richard Bush, the son of a bank president, a man with a fine education and successful careers in the United States and Japan.