Bruce Springsteen hit the record charts a couple of years ago with a song titled, “57 Channels and Nothin’ On,” a catchy novelty tune about his cable TV system in the States. Here in Japan, the Osaka Usen 440 cable-radio system has 440 channels with everything on you could possibly imagine.

There’s a request line where listeners can phone in to order their favorite songs, mood music, current top hits, Japanese pop music and the latest CDs. There’s an all-Beatles channel, an all-Elvis channel. You can hear rock, jazz, soul, blues, reggae, classical selections and live recordings, most in stereo and many in English.

Choose seasonal music, motion picture sound tracks, music for young people, karaoke and ethnic music from countries all over the world. Thirteen channels are devoted to language instruction, 10 to children’s programming, eight to spiritual music and sound effects and seven to religion and literature.

Amuse yourself listening to the sounds of nature (rain, wind, port town and rooster calls and bell ring­ing). There’s a Fun Corner with jokes, scary music and “Something of Everything.” Other channels fea­ture birthday and wedding music, mental exercise, travel information, medical news, announcements from the post office, even a Music for Pets channel. 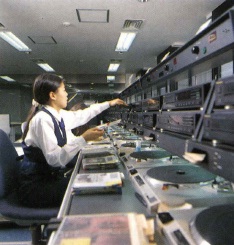 The Usen system features background music of all types for businesses, offices, stores, shopping arcades, factories, offices, shops and hotels. However, the num­ber of private homes subscribing to the Usen has now reached more than 200,000 nationwide. The 24-hour-a-day service uses a coaxial cable, designated for fre­quency transmission, for the nationwide network. High quality sound reproduction is made possible by Pulse Code Modulation.

One enthusiastic Usen user told Weekender that the convenience and pleasure of having the system in his home has eliminated the use of recordings or tapes during parties hosted at home. “Since I’m a jazz fan, I simply tune in to B-18, 19, 20 or 21. the four jazz channels. No. 19 is especially popular with my guests, since it features jazz vocals from the golden days of swing and jazz. And it’s continuous; no need to jump up to change the record or switch tapes. And best of all, the selections are without fail very tasteful and nostalgic. Indispensable!”

Those without bilingual capabilities on their TV sets can simply tune in any of Japan’s channels on Usen and the foreign language version of the movie or production will be broadcast simultaneously.

For the more esoteric, one might want to tune in North Korean Folk Songs (H-39), or Pachinko Arcade (D-38), Rain, Wind and Thunder (J-22), Mother’s Heartbeat (1-30), “Alibi Music” in which one can provide background sounds of a pachinko or Mah-jongg parlor, telephone booth or bar and pub (j 30-32).

All you need to receive the Usen pro­gramming in your home or apartment is an amplifier and a pair of speakers. The system requires a simple installation normally com­pleted within an hour, and the fee is just ¥6,000 per month (the cost of three CDs), following an initial ¥30,000 installation fee. An alternative is to waive the installation fee and pay ¥7,000 per month.

For more information, call the Osaka Yusen Broad­casting Corporation in Tokyo at 0120-417-440. They’ll send you a brochure in English, with an explanation and list of programming. If you’d like to receive the system, you fill in the attached post card application form. The company will then contact you about a week later and set up a date and time for installation of the equipment and confirm method of payment.