On the spritual side

Welcome back to all who were away for the summer and a special welcome to newcomers in Tokyo. You might be surprised to know there are six English-language churches of various faiths around the Tokyo area. I certainly wish someone had told me about them back when I was a newcomer eight years ago!

We introduce a church which really needs no introduction, it is so much a part of the expatriate community. Located in the heart of Rop­pongi in the warren of back streets between the Self Defense Agency and the U.S. Embassy Compound, the Franciscan Chapel Center is church for upwards of 2,500 Catholic parishioners.

Mass is held on the second floor of the Center; in English at 6 p.m. on Saturdays and four times on Sundays. In addition, mass is held in Japanese every Sunday at 7 p.m. and in Tagalog at noon, the last Sunday of each month. On Wednesday evenings at 6, there is mass with Novena prayers and during Ad­vent and Lent, additional services are scheduled throughout the week.

Visitors will want to note that though mass is open to all Christians, communion is offered only to Catho­lics … be sure to read the small print in the bulletin. Babysitting is offered during the 10 o’clock Sunday service, and Sunday School classes are held from 9 till noon.

Community service is a way of life at the Franciscan Center. The Women’s Group provides English-lan­guage classes to unfortunates, they hold bazaars twice a year to raise money for the needy, and they visit Seibo Hospital (St. Mary’s International) to spend time with foreign patients in need of visitors. This particular volunteer service is open to men and women out­side the parish as well, and Mrs. Jacqueline Verdonek, coordinator of the program, invites Weekender read­ers who wish to become involved to contact her: 3486-4770. 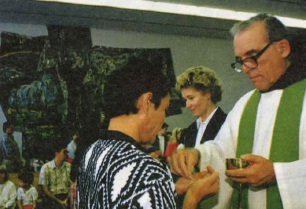 Most notable among the Franciscan outreach is the Rice Patrol. It was started six years ago by Father William, head of this parish, who cooked up the idea after he heard that people were going to sleep hungry in Yoyogi Park. (Yes, Virginia; there are homeless in Japan.) At first, he bought the onigiri (rice patties) at a store and distributed them himself. Eventually, other parishioners joined forces and soon nine electric rice cookers were brought in to boil up 14 kg. of rice every morning in the basement.

Now a team of two or three people takes the onigiri packets to Shinjuku Station every morning at 5 and distributes it before the police arrive to shoo away the homeless. This is repeated at 8 p.m. in Asakusa where the abject poverty has become so severe that hun­dreds of men (and some women) line up to receive the handouts. Anyone wishing to participate in the Rice Patrol is very much encouraged to do so by call­ing the Center and volunteering part of a morning or evening once a month. Donations of 5-kg bags of rice are also being gratefully accepted.

About his work. Father William says, “Charity is not something we think about; it’s a natural part of our daily lives … we just do it.” Capping his 26-year career in Tokyo, the former Queens, New York City, cleric is laying the groundwork for the first-ever half­way house to be built in Tokyo. It will be in Asakusa.

Another exceptional project of mercy is the Franciscan Philippine Center. Created two years ago at the behest of Father William, it is a 24-hour refuge for Filipinos in need of medical, legal or spiritual help. Father Ely Adel from the Philippines is director. He estimates that some 300-400 people pass through his doors every month. It is hard to imagine, but Father Ely makes do with funds raised entirely by volun­teers selling hot meals at the Center on Sundays.

By the way, Oct. 4 would be the wrong day to check the center out, because the Franciscans will all be at Sacred Heart International School in Hiroo cel­ebrating their 25th anniversary. At noon, Archbishop Peter Shirayanagi of the Tokyo Diocese celebrates mass, after which there will be a family picnic (bring your own lunch), games for the children and musical entertainment. It is a nice touch that the archbishop will participate, as it was his mandate that started this English-speaking parish in the first place. 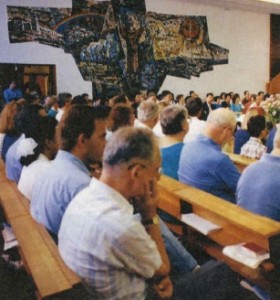 Back in the ’50s, the foreign business and diplo­matic community used to take advantage of the allied military chapel which was located on Washington Heights (now Yoyogi Park), while a handful would meet in the auditorium of the Franciscan Language Center. When the 1964 Olympics were being planned for Tokyo, the U.S. Forces Japan gave up its Washing­ton Heights bivouac to make way for Olympic Village. The spillover into the Franciscan auditorium was inevitable and Archbishop Shirayanagi mandated that a parish be established in Tokyo to serve the English-speaking community exclusively.

Funds for that new chapel came from the Catho­lics in Tokyo and from China where Franciscans had been expelled a decade earlier. There was a diplomatic family named Kawamura who owned a house right next to the Language Center in Roppongi. They were persuaded to sell their lot and that’s how the Franciscan Chapel Center was created in 1967. Over the years, the Chinese Franciscans were repaid and the parish has been serving the foreign community ever since.