Down to the sea in sips

Five minutes out of Tokyo Station, we broke out the vodka and tonic, complete with glasses and ice. With only 24 hours in hand, our destina­tion was the beach resort area of Tomiura on the southwestern tip of Chiba, what most people call the Boso Peninsula.

Some reckon the trip takes one hour and 55 min­utes aboard JR’s Sazanami Express, and approxi­mately two hours and 15 minutes by car on a good day. Here is a more accurate measure: It takes ex­actly three well rounded drinks sipped graciously with good friends.

Tomiura is a small town on the Tokyo Bay side of Chiba, a few kilometers from Tateyama, the biggest city in the area. The bus from the Tomiura Royal Hotel met our train and took us up a steep hill to the park and forest area where the inn is located.

The resort hotel opened in May of 1990, and it and its environs are some of Tokyo’s best-kept se­crets. Summer swimming beaches and a fishing area are only five minutes away by hotel bus. Tomiura is known for its luscious loquats and flowers.

It is within easy driving distance of Tateyama Castle and a model mountainside agricultural en­deavor called Mother Farm. Sea World is at Kamogawa and the Yoro Keikoku Valley has spring azalea and wisteria that line hiking trails.

General Manager Mitsuji Sugiyama says there are five golf courses within 30 minutes of the Tomiura Royal and he can generally arrange a round for guests when he’s given a month’s advance warning. 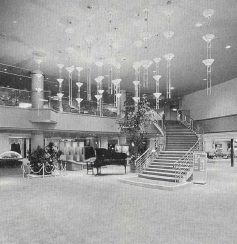 The six-story, 221-room hotel is a treat in itself. It has an outdoor swimming pool, two all-weather ten­nis courts, a karaoke bar, some fine meeting and con­vention rooms and the obligatory wedding facilities.

There are indoor and outdoor Japanese bath facili­ties and saunas for men and women. The massage chairs outside the bath area provide a rolling back rub that cover so much territory a companion sug­gested it to be almost indecent.

Forest trails adjacent to the hotel lead to picnic areas, camp grounds and observation points, gradu­ally winding down to the rocky sea coast. (The swimming beaches are on the other side.) The wa­ters are surprisingly clear.

We walked for an hour, virtually by ourselves, on a day when back in Tokyo there was a spectacu­lar jam of commuters thwarted by a morning rush hour rail and bus strike.

Sunsets seen from the hotel’s Sunset View bar or elsewhere in the area are often spectacular, with the pinks, yellows and blues that high-rises, haze and construction cranes (Japan’s national bird) usually conspire to block from us city folks.

The hotel rooms were big enough for two or three three-quarter beds plus a sitting area and a picture window looking out over the bay. We chipped the point off one of the hotel’s rating stars for the small­ish module bathrooms.

We put the point back on the star after checking out the restaurants. They include the Yokihi Chinese res­taurant, the Taikobo seafood restaurant where live fish are taken by net from floor holding tanks, the Nabanatei Grill where fresh seafood is prepared over charcoal and the Renga-tei steak corner where the best in beef is cooked on stainless steel grills in front of you.

We chose the Renga-tei and chef Yoshikazu Suzuki, a veteran of the Century Hyatt Hotel, did us proud with 250-gram sirloins medium-rare, sliced bite-sized and served with three wonderfully com­patible sauces. Suzuki-san topped off his multi-course meal with a fried rice he whipped up on the grill.

The restaurants are a bit pricey, ranging up from ¥8,000. Room prices vary with the season and the holiday. Charges in general, according to manager Sugiyama, run from ¥18,000 to ¥23,000 and usually include two meals.

“Tomiura is three to four degrees (Centigrade) cooler than Tokyo in the summer and about the same warmer in the winter,” Sugiyama said. “We wel­come people from Tokyo to stay overnight or just join us for a cup of tea.”

Business during the hotel’s second year is up 40 percent and particularly brisk on the weekends and holidays. Visitors looking for a rest and lower prices can find them during the week.

Foreigners without much knowledge of Japanese can get by fairly well, Sugiyama said. A staff member who speaks English can almost always be found. Sales manager Rokuro Kojima, for one, is very helpful.

Reserved seats are suggested on the Keiyo Line train to Tomiura; ¥4,300 each way. Travelers should also be warned that although the Keiyo Lines are laughingly referred to as being in Tokyo Station, the entrance is closer to Yurakucho than to the Marunouchi entrances. Those who have taken the line to Tokyo Disneyland will understand.