The energy, the aura of Pi Water

Continuing with Weekender’s investigation into the claims of wondrous results in agriculture, indus­try and medicine through the “invention” of Pi Water, a certain energetic “aura” emitted from specially treated drinking water or ceramic balls conditioned by Pi. “Life Energy” is another term used for this treated liquid that is said to closely resemble the natural biological fluids found in the human body.

One thing we learned in our interviews with Dr. Shinji Makino, President of IBE (Institute of Bio-En­ergy): the working of Pi Water are, at best, difficult to explain in layman’s terms. Or any other terms. Well nigh impossible, in fact. But the evidence is there, demonstrating the wonders to be achieved through this discovery, more than 20 years in the research and development stages.

Photos supplied by Dr. Makino show just a sampling of the effects real­ized via the Pi-Water syndrome. In pictures are shown a before-after sequence of slaugh­tered pigs. The left photo is a cross section of a swine raised on ordinary feed and water, taken sev­eral days following killing and dressing the animals. The photo on the right shows the meat blotched with con­gested blood. The pig in the photo below drank Pi Water and ate only food treated with the substance. The pigs were slaughtered at the same time. Not only is the meat fresher, more healthy and remained edible for a much longer time, other dramatic effects in the animals were also noted.

Dr. Makino has testified that during their lives, the piglets were fed only nourishment treated with Pi; they drank only Pi Water. The mother sow also was nourished only with Pi-treated foodstuffs. When the piglets were born, they were identical, all a healthy pink, all squealing and full of pep. Energy, if you will. During their lives, there was no offensive smells so frequently identified with pig pens. Even the pig feces had no bad odor. 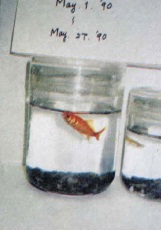 Another near-miraculous experiment was shown, using goldfish. Two ordinary goldfish were put into identical bowls which were then covered with foil. Usually, a fish under these conditions is fated to die within 24 hours. In the photo the gold­fish on the right has suffered such a fate. Ceramic balls which had been treated with Life Energy were dropped into the water in the other fishbowl. This lucky little guy, as you can see by the photo, is still swimming happily about after 26 days. When inter­viewing Dr. Makino, I spied such a goldfish swim­ming in an enclosed bowl on his desk. He said the fish experiment was in its fourth month.

In trying to explain such successes, Dr. Makino is somewhat at a loss, the “miracle” results remaining beyond his powers of description. But he guesses like this: “Perhaps breathing itself is only a way of obtaining bio-energy for living things. The goldfish in his bowl floats in Pi Water, a sea of bio-energy. It can obtain such bio-energy easily, surrounded in a sea of Pi-treated sub­stances. Therefore, it needs neither ‘breath’—oxygen in the water—nor food.”

I saw the healthy goldfish and the data that at­tested the dates the fish was placed in the enclosed Pi-filled environment. Who knows? Maybe he’s still swimming about on Dr. Makino’s desk! 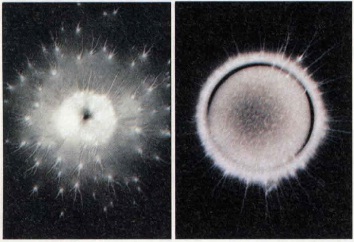 The remarkable photos actually show an atmosphere of energy ema­nating from a Pi-treated ceramic ball. A camera was placed below a beaker of Pi Water with a ceramic pellet inside. The energetic waves blasting away from it are evidence that such an aura exists.

Other photographic evidence also reveals that similar “miracles” occur when fruits, vegetables and other agricultural products are treated with Pi. There is a compost-like substance which is used in place of fertilizer—absolutely with no chemical or harmful additives—treated with Pi-Water called akane. Crops, fruit and vegetables grown under these conditions are larger, more tasty and remain fresher longer.

Fresh fish caught, cleaned, then immediately placed in plastic bags treated with Pi Water, allow the fish to remain absolutely fresh and edible liter­ally for weeks. In similar tests with fish caught si­multaneously and placed in untreated bags the fish was spoiled, stinking and, of course, inedible.

Dr. Makino asserted in our interview that, along this reasoning, Pi Water taken by humans will be equally—or more—beneficial.