Nestled among the zelkova trees lining the bou­levard called Omotesando, Tokyo Union Church’s dis­tinctive spire declares its unmistakable presence in Tokyo. Because of its prominent location and its long history in Tokyo, it could be argued that Tokyo Union Church needs no introduction.

Any day of the week, the 20-some rooms of the four-story church are brimming with activity. Swing open the heavy, carved doors of TUC and be pre­pared to be swept into a surge of good vibes and high-level activity. You can check your negative feelings at the front door! 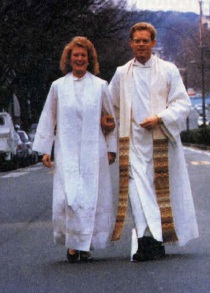 TUC’s sleek, modern architecture belies its tortu­ous 120-year history in Tokyo. Back in the 1850s, when foreign diplomats, teachers and traders were in defiance of the law if they dared to hold Christian services (a person could be executed for such gall), a hardy band of pioneers did just that. Tokyo was not even officially opened to foreigners at that time. It was 1869 before American Consul Townsend Harris prevailed on the shogun to allow foreigners into Tokyo.

Up until then, they could only live in Kobe and Yokohama. Now they could be in the capital… as long as they kept to themselves. The shogun allowed for the creation of what was to be, literally, the first gaijin ghetto—in the undesirable mudflats of the low-lying Tsukiji area. There that handful of Americans, English, Dutch and Germans armed themselves with optimism and created the first Union Church. It was to be interdenominational and protestant. The year was 1872.

As the samurai and merchants got used to their new neighbors, provisions were made to allow the foreign community to penetrate into the central ar­eas. By the turn of the century, the Union Church decided to go with the exodus of foreigners into the center of town and closed its doors on an era.

The wisdom of that move is not all too clear, as there was to be no chapel again for another 30 years. They met in various Japanese churches, the Ginza Methodist Church, Aoyama Gakuin chapel, among many other places. In 1923, they put their collective minds to fund-raising for their own new chapel again and broke ground on a plot in Toranomon. Unfortunately, the Great Kanto Earthquake leveled their plans and they started another round of migration. In those days, various pastors and associate pastors were called to minister to the “wandering church.” 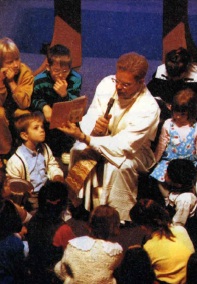 A decision was made in 1933 to purchase a plot of land on what was then known as Jingudori, now Omotesando. Pic­tures of the church show a parish of classic proportions. Among the parish­ioners back then was Sen Nishiyama (now of Sony) who with his wife Shinobu are the members of longest standing at the TUC now.

“All we have left from the old parish is a brass offering plate that survived the air bombings of 1945,” reminisces Nishiyama. The church was burned to the ground. He remembers seeing his foreign friends disappear one by one to internment just before the on­set of war. Japa­nese who were members of the for­eign church were put under scrutiny. Many were ha­rassed. Under­cover security men visited the church under the guise of worshiping and the following week, a new group of people would be rounded up.

“Those were some days,” muses Nishiyama with a distant look in his eye, implying, “if only you had several hours so I could tell you all.”

The post-war era saw TUC lose custody of its church property. As old members began to return to Tokyo, they availed themselves of military chapel ser­vices of the Occupation Forces. Bit by bit, they pulled themselves back together and by 1949 regained cus­tody of the land. They soon found the optimism to reconstruct their Tokyo Union Church.

The Japan Finance Ministry even gave $7,000 to help in the reconstruction and the TUC Women’s Society launched a city-wide appeal for funds. The sanctuary was completely restored by 1951. But that was not the building we know today.

That structure came in 1979 when the congrega­tion decided they had outgrown the building and, once again, vacated the premises for a rebuilding period. Much to their surprise, their Japanese neighbors were distressed by the demise of the local land­mark, circulating a petition asking church leaders to “not destroy our beloved church.” They weren’t even members! But progress prevailed and a Japanese firm was assigned the design and construction con­tract. In 1980, the Tokyo Union Church we know today celebrated its inaugural worship service. And now you know the rest of the story.

If you’re just a bit curious as to what goes on at TUC today, you might want to drop by one Sunday. You might even get to touch a piece of history if the brass collection plate comes by your pew. There’s parking at the Hanae Mori Bldg. up the street and there are Sunday School classes for every age group.