Imported brews make a run for sudsy supremacy, but more Drys, Hardys, Namas, 5.5s & such keep locals ahead of race

If you recall when you was 360 to the dollar, you also remember when beer in Japan was just that — beer. There were Sapporo, Kirin, Asahi and Suntory brands and they came in one size can—the 350 ml. or 12 oz. job. There were three bottle sizes—obin, chubin and kobin (large, medium and small). Both the cans and bottles had rather plain, generic-looking labels.

Imported beers are picking up also and the Japanese are acquiring a taste for such foreign brands as Budweiser, Coors, Heincken, Miller, Lowenbrau and the trendy Mexican Corona.

There doesn’t seem to be any way to further expand the sizes, as sake shops and beer machines are stocked to the hilt. The curbside vending machines used to be simple and square but some of them arc now so huge and complicated they seem to take up a city block and, once you figure out where to put the coins or ¥1.000 note, you have to listen closely to hear from which of five or six chutes the can will exit.

But while the size expansion, begun in 1980, may have no where to go, new types of beer keep hitting the shelves. All four major beer companies are introducing products one after another, following Kirin’s hard-on-the-ears catch phrase, “Beers New.”

There was a time last May when Kirin’s Cool, Sapporo’s Hardy and Cool Dry, and Suntory’s “Sae” hit the streets within a 10-day span. They followed close on the heels of Asahi’s yeast beer debut, and while the breweries say they have no plans to come up with any more new brands for the remainder of this calendar year, you can be sure ideas are being formed for what will come next.

Articles have appeared in newspapers and magazines chronicling the “Beer Wars,” which apparently began in early 1987 with the launch­ing of Asahi Super Dry. According to Keiichiro Otsubo of Asahi’s P.R. division, that was the best thing that ever happened to his company, the beer market in Japan and, indeed, the world. 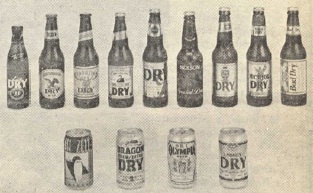 Otsubo says the concept for “dry beer” came from the brewing of sake and white wine. Asahi Breweries noticed that many young people favored the “dry” taste of those beverages and decided to launch “dry” beer. It was an instant hit that could not be ignored by Kirin, Sapporo and Suntory who began marketing their own Dry brands in Feb­ruary of last year. By that time, 50 percent of Asahi drinkers had switched to Su­per Dry.

The sudden and unexpected popularity of the dry beer concept spread like wildfire and soon major breweries in other countries jumped on the bandwagon. Today, there’s Budweiser Dry and Michelob Dry in the U.S. and a La-Batt’s Dry in Canada, just to name a few, and their number is growing.

The “dry” idea, however, was just the beginning of a beer revolution in Japan that has seen the competing com­panies move toward specialized beers. All four now have a mall beer, for example, led by Suntory which in fact named its brand Malts.

Currently the emphasis is on beers that are “cool,” “sharp” and “clear.” and the beer companies are targeting their sales of certain beers to certain age groups of the beer-drink­ing public. Motohiro Kawada. Director of the Public Rela­tions Department of Sapporo Beer, says they came up with the Hardy brand to appeal to the “young,  fashionable” crowd. The Hardy label describes the taste as both sharp and clear and, so far, sales are going well.

Akiko Nakajo of Kirin’s P.R. section goes along with that idea, saying her company is aiming its new Cool beer toward consumers in their 20s. However, she says, “Kirin Lager is our almighty brand and best seller because it is favored by sarariiman workers in their 40’s and 50V who make up the hulk of Japan’s suds-swilling  population.

You can’t miss the Cool container—it’s a bright green one with white lettering, giving one the impression the beer inside might taste like menthol. Sapporo’s Cool Dry, also geared toward young adults, comes in a silver can with a light blue sailboat on the logo. In both cases, the words “Cool” and “Cool Dry” are in bigger letters than the words “Kirin” and “Sapporo,” and arc sure to be best sellers to adults of all ages on hot summer days.

Asahi and Suntory have yet to insert the term “cool” on any of their labels but Suntory’s latest weapon in the beer wars may start another new trend. “Sae” is the new pro­duct’s name and it’s identified by a single kanji. The char­acter means “sharp” and it’s a 100 percent mall beer.

Suntory P.R, rep Kiyoshi Inoue says this brew should appeal to “anyone from the age of 20 to 100” because it blends the old and new: A kanji symbol with a contempo­rary meaning and “a taste that caters to all ages.”

Meanwhile, Asahi’s Otsubo admits the company isn’t too sure how their new Yeast beer will fare. “We are selling it on a trial basis only at the 6,000 liquor outlets in the Tokyo area for the time being. If it proves to be popular we’ll distribute to all 600,000 sales points nationwide.”

Not all beers become instant best sellers, you see. One thing that hasn’t really caught on here is light beer. Some Japa­nese would like to cut down on calorics hut most don’t like the taste. Kirin continues to sell its Light Beer and insists it is selling OK, but the other lights have all but disappeared.

Sapporo had a “light, tasty” beer called Next One which was pood for a joke (“I finish­ed that one, now I’ll have…”) but that was about it. The company withdrew it earlier this year. Suntory’s Penguin’s Bar is a light beer that is not selling well and you have to look hard to find it. Inoue says ifs still available on a limited basis Asahi has never tried marketing a light beer and probably won’t. While most of the beers out today carry a 4.5 percent alcohol rating. Suntory offers its Dry one with a 5.5 alcohol content — and it says so on the label, in big, bright red numbers. The 5.5, along with Sapporo’s Hardy, by the way, are the favorites of the Week­ender staff when we need a re­fresher after putting out a big edition.

Then there’s On the Rocks, a knock-out punch of a beer brewed by Sapporo with a whopping 9 percent alcohol meant to be drunk, as it name implies, over ice. However, we suspect most people ignore the “rule” and down it straight. I asked Sapporo’s Kawada about it and he just laughed, as if there were some story behind it he didn’t want to tell. It’s sold only in the 350 ml. can or 330 ml. bottle. Don’t get be­hind the wheel after this one!

Sapporo also sells a black beer, Sapporo Classic, Edelpils (a German pilsner), the traditional Yebisu brand and a brew whose name translates to “A Winter’s Tale,”  available only between November and Feb­ruary. There’s also a Sapporo brand sold in Hokkaido called “White Night’s Tale” and the company is behind the creation of a special brand for sale in Kyushu, called “Ours.”

Asahi has a black beer as does Kirin and the latter recently began sale of Half and Half with a split yellow and black label. Kirin also has the Matt Dry beer, Heartland, Mein Brau, Kirin Export and Kirin Stout.

Imported beers are beginning to pick up popularity among Japanese drinkers. Each company here has a tie-up with a major foreign brand: Suntory-Budweiser, Kirin-Heineken, Asahi-Coors and Sapporo-Miller. According to Suntory’s Inoue, “Bud” is Japan’s best-selling gaijin beer.

However, most Japanese prefer the domestic varieties and sales of beer continue to rise dramatically. According to Sapporo’s 1987 Annual Report, sales for that year reached 1,106,027  kiloliters (9.4  mil­lion U.S. barrels). That’s a lot of swallows, and that’s just for one company. Multiply it by four.

Inoue says that, of all those in Japan of drinking age, 10 percent are considered “heavy” drinkers who down 10 or more glasses of beer per day. An­other 10 percent are “medium” drinkers who consume about seven or eight cups daily. Fifty percent make up the “light” drinking crowd who gulp a glass or two, and the remaining 20 percent do not drink beer.

There is no shortage of places to drink beer in Japan, either. Beer halls and beer gardens are everywhere — on street corners and department store roofs. Among the more colorful watering holes are the  Ebisu Beer Station (soon to be moved) where you bend your elbow in a stationary train car, Daini Okada’s temporary Opera joint in Hiroo and a stand on the platform at Shinagawa Station where you can grab a quick mug while changing trains.

The breweries have affiliated beer hall chains that arc be­coming rivalries like their parent beer companies. The popular Kirin City has bran­ches all over Japan, as does the Sapporo Lion Beer Hall outlets. Asahi has jumped into the act with a drinking place called—would you believe— Asahi Super Dry. The first opened in Tokyo last year and the second recently set up shop in Osaka—across the street from a Kirin City franchise. Of course Suntory has its name in the drinking hall business too, with the Suntory Jigger Bar.

So, don’t over-do it and, as FEN often reminds us, please don’t drink and also drive, but with the hot weather about to set in, and when you need something to cool off and refresh yourself, pick your favor­ite brand and size of beer and —bottoms up!

In the meantime Sapporo, Kirin, Asahi and Suntory will keep cranking out new ideas and it’ll be fun to see what they come up with next.

I wonder which will be the first to make a fine malt cool dry light yeast draft pilsner beer. Kampai!