My world of art

Katsuji Matsumoto epito­mizes a man of his era. He was born at the birth of the great age of magazine and book illustration and died at the same time that this wonderful art form finalized its decline.

He was also a modern man who was as proud of his Japa­nese heritage as he was of the new ideas he developed from his exposure to the vast foreign art world which opened to Japan a half-century ago.

Katsuji Matsumoto was one of Japan’s most famous illustra­tors—and one of my dearest friends. He died peacefully a few weeks ago in a beautiful setting at the base of foothills leading to Mount Fuji on the Izu Peninsula.

When he was born, the art of illustration was just coming out of the restrictive age of using handcarved wood cuts or wood engraving to reproduce pictures for publication. Although the technical skill was superb, the method of re­production was the same as was used by Albrecht Durer in Europe and Hokusai in Japan many ages ago.

In America and Europe the artist was required to draw on the wood and the engraver cut away those areas between the lines, creating the white areas in the finished picture.

When it became possible for photography to transfer the drawing on to the woodblock, it freed the artist from concern­ing himself with the actual drawing on wood so that the cutter could interpret it for the finished product. However the engraver still had to cut, and many of the illustrations in American publications had signatures from both engraver and artist.

Around 1910 halftone en­graving was a common form of preparing the picture for the printer. However the engraver was still needed to save the picture from becoming muddy and grey-looking. Eventually the methods of reproducing art work became what we know of it today. It was during these intervening years that a young artist came on the scene in Japan with his head full of the tales of Anderson and Aesop and with the strong desire to offer to the public a pictorial view of what had been known through words only.

A good portion of our so-called “knowledgeable public” dismisses the illustrator and his product to a lower rung of the ladder than the “fine artist.” His product of commercial art being commissioned from a specific source of payment. To describe a story or event for a mass public seems to have acquired the stigma of being impure when compared with the   nobler product of  the painter who had nothing other than his innermost feelings for motivation.

If this was the case, artists such as Giotto, Botticcieli, Michelangelo, Durer, Hokusai, Hiroshige and a host of others, including Matsumoto who produced paintings on commission from the church, wealthy patrons or publishers, would be down-graded to the bottom of the commercial pit.

There is no question that the illustrator has an obligation to his client. But this obligation does not release him from his responsibility to himself to make a contribution to the heritage of picture-making to which he is only a small link.

Such an artist was Katsuji Matsumoto. Working in an age where taste, understanding of pictoral values and a commit­ment to quality were the main goals of achievement, he achieved more than his share of successes. Some of his techniques and pictorial vocabulary became the guide-lines for today’s mass of cartoonists and illustrators who often con­fuse technique or facility with art. As the great American illustrator Albert Dome said, “An artist must have more than virtuosity.” 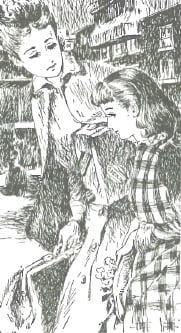 Matsumoto was an artist who understood and surrounded himself with beauty. His collection of pottery from the different kiln sites in the Japaneses interior was magnificent. These were not pieces which were purchased in the Tokyo department stores, but examples brought home from his many excursions to the kiln sites. It was he who taught me about Bernard Leach and Shoji Hamada.

One fine Sunday about 20 years ago prior to Mashiko be­coming the tourist trap that it is, we drove in a mini-bus, his family and friends—about 20 in all, and wandered through the small village which Mashiko then was. We visited the kilns of the famous and returned to Tokyo over-laden with bags of heavy ceramics.

It was Katsuji Matsumoto who opened my eyes to the art of Munakata through the originals he owned. He pulled out books illustrated by Yumeji Takehisa and, through this experience, introduced me to the art of the Meiji Era, of which he was a close observer.

Oh, he will be missed! The young artists producing the weekly comic-type drawings in today’s magazines do not realize what depth their prede­cessors had, nor where their techniques come from. To them it is a natural way to draw. Unfortunately, they do not seem to expose themselves to the illustrators of the past who inspired Katsuji, nor do they even realize that Katsuji even existed.

It’s an honor and prized pos­session to have witnessed the transition. I feel as one who is part of the select few, I’ll miss Katsuji Matsumoto. He was a very important part of my world of art.