A farewell to the Kissing Gods

The poster shows a stylishly dressed Japanese couple in their 60s or thereabouts. The man, who is not drunk, is bending over to kiss the woman, who waits ex­pectantly. Behind them is a huge blown-up still of two stars of the silent screen also caught in the instant before their lips meet. The poster bears the caption “one more kiss” and is part of the Japanese National Railways’ “Full Moon campaign aimed at getting elderly couples to travel together.

My companion, a Japanese woman of 32, sniffs. “Humph, I wonder if she ever got the first one.”

We agree that the majority of women past age 50 probably did not. Unless they were exceptionally daring moga (“modern girls” of the ’20s) or came out of the mizu shobai, Japan’s demimonde.

During the ’50s one researcher found that about 80% of the married switchboard operators he queried had never been kissed. “We Japanese don’t like kissing,” wrote another middle-aged sex researcher some years ago. “To us it seems animal-like.” Rushing to disagree with him will be anyone who has visited Tokyo’s Hibiya Park after dark or wandered into one of the city’s scores of dohan kissa, coffee shops that cater to young petters. And all those whose lips have formed half of a foreigner-Japanese interface.

Nevertheless, there’s a good deal of truth to what he wrote, and the farther you go from the big cities, the more it applies. Kissing lips-to-lips is generally considered foreplay and, if the re­searchers are correct, there hasn’t been much interest in that, at least not among males.

Japan’s first movie kiss was considered so potentially upsetting that it was not actually shown. As in old Hollywood sex scenes, it was carefully built up to and, at the last moment, left to the viewer’s imagination. The lovers, under an umbrella, moved their faces inexorably closer until the tension was unbearable. At that moment, the umbrella dropped between them and the camera.

A friend now in her 70s recalled the hubbub raised over the news that a movie coming to town would show Japan’s first on-screen seppun, as the kiss had come to be called. Made curious by the unfamiliar word, she went to her older brother for an explanation. After a moment’s thought, he replied, “You’ve seen horse dropping (fun) in the street, right? Well, if you take two droppings and bring them into contact (setsu) like this,” he said, gesturing with his fists, “you’ll get setsu-fun, or seppun.

Another acquaintance told of the reaction of his wife-to-be at their first kiss. Shoving him violently away, she spit several times on the ground and rubbed her mouth repeatedly with her hand. “What kind of nonsense is that!” she shouted, as though their first seppun had been of the horse variety.

The kiss first turns up in print during the Kamakura Period (1185-1333), when it was known as kuchi sui (lit­erally, “mouth sucking”). The European varieties arrived, in the company of syphilis, with Portuguese seamen and traders in the late 16th century. But while kissing seems to have lagged behind, syphilis raced through the land, leaving its indelible mark. 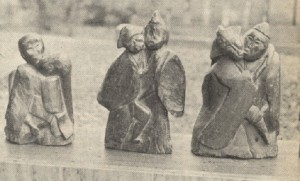 Creeping northward from the Dutch trading station at Deshima, an island near Naga­saki, during the Edo Period (1615-1868) was the Dutch word kus. But by this time the technique Americans call “French kissing” was being practiced in the brothels of Edo, where it was known as sashimi.

They not only did not abhor sex, but gave themselves to it zestfully and encouraged it in their followers. Ethnologists call Japan’s original, sex-positive religion minkan shinko, folk religion, and many mod­ern Japanese, highly ambivalent about sex, are embarrassed by its surviving artifacts and festivals.

But how did kissing spread to communities deep in the mountains and why did it make such a lasting impression?

A religious connection seems plausible. During the Edo Period, the custom of making pilgrimages to important religous sites became extremely popular. Not just for religous reasons. Pilgrimages provided the common man with a valid reason to get away from his village, for sightseeing and even pleasure-seeking.

If pilgrimages and sex play seem incompatible today, there were no more impediments to mixing them in those days than there are to combining business trips and sex tours today. In fact, the pilgrimage of the Edo period could be considered the forerunner of today’s sex tours, whether or not devout souls who eschewed such activities outnumbered the merry mixers.

Even before pilgrimages be­came a boom industry for inn­keepers as well as priests, Japanese panders recognized the great drawing power of holy sites. And that was the start of the enduring custom of locating houses of prostitu­tion within a stone’s throw of famous temples and shrines, thus adding to the attractions and revenues of both institu­tions.

Under this arrangement, the pilgrims, among whom men greatly outnumbered women, were able to spend their days at prayers and sightseeing and their nights learning the latest refinements of commercial sex. And because some men were traveling on village funds, they shared the latest sex and reli­gious lore with the stay-at-homes.

Since there were few pro­fessional women with whom to practice the arts of kissing, the village males naturally turned to their mates. Hut whether spontaneously discovered or transmitted by ardent pilgrims, the kiss made a lasting impression, if only on stone. The gods on whom it was bestowed are called doso-jin, which scholars think origi­nally meant “earth ancestor gods.” The god statues are small, most standing only about a foot high. At some sites they are represented by a phallus, a stone shaped by nature or one carved in the round, or by a tablet with the word “dosojin” incised in it.

But at many other places the gods have been anthropomor­phized and are portrayed in low relief as a man and a woman. While many of these “couple dosojin” stand modest­ly side by side, the range of their expressions runs all the way from praying to mutual genital fondling to naked copulation.

Today, many of the loving dosojin couples are still to be found kissing, fondling and coupling at the hamlets they were erected to protect hun­dreds of years ago. These days, the dosojin statues, as well as Jizo, Koshin and other Bud­dhist and Taoist statuary, have also attracted the attention of thieves. As they grow ever scarcer, the most unusual or attractive ones arouse the avarice of rich collectors who ask no questions of the men who supply them. As a consequence, some have been removed to temple or shrine compounds where they are kept under lock and key.

Michael Czaja, an American architect, artist and scholar, made an important discovery while studying dosojin for his highly informative “Gods of Myth and Stone.” On some of the later stones, he reported, the woman of the dosojin couple is diminished in impor­tance. In earlier times, she had been made about the same size as her companion. As time went on, however, she was made physically smaller or was portrayed in a clearly sub­servient position.

Czaja doesn’t say so, but the diminished females reflect the declining status of country women by the extension of the military morality into the peasant mentality. The samurai were far more interested in the arts of war than the arts of love, which they were taught to despise.

Tramping around the hills of five prefectures, the sex folklorist Kenkichi Ito found more than 3,200 couple doso­jin. Almost two-thirds of these show some degree of affection between the mates, with 648 surviving in Nagano, followed by Shizuoka with 564 couples.

Somewhere along the way, the Confucianists and the mili­tarists won out. Wives aspiring to be erotic companions as well as mothers have had a hard row to hoe for at least the last century. Showing affection for a wife appears to be a problem for many Japanese men as well. At an extreme point of this kind of emotional withdrawal is the man who told a marriage counselor that he performed satisfactorily with prostitutes, but was impotent with his wife. When advise to introduce play techniques in” his conjugal love-making, he replied with some heat, “But doctor, a wife is not a play-mater!”

Modern commentators often praise the straightforward sen­suality of Japan’s earliest songs and poems, at the same time reacting with pained embarrass­ment to displays of affection by today’s young lovers. Given the rational temperament fos­tered nowadays, it is not sur­prising that dosojin worship is almost extinct. Because dosojin mirror the projections of their worshippers, the extinction of these loving deities signals th end of a force that fostered and perpetuated affection be­tween couples for hundreds of years.

If there were other forces of love to replace the dosojin, contemplation of their end would be less lamentable. But when it comes to promoting tender sexual relations, the popular arts as well as public and private educational institu­tions fail most miserably.

Who now will give the kiss of life to counter the dead­ening force of the salary man life-style?