How To Make Friends With Your Shoes On

When Japanese tourists and businessmen leave on a foreign trip these days, they get shots, a passport and detailed instructions on “how to be an international person.”

Japanese affluence has created a travel boom (836,000 went abroad last year; an estimated 1.3 million will go this year). It also has led to well-publicized bad feeling toward Japanese travelers among many other peoples, and the pressure creat­ed a little booklet, written and distributed by the government, with a message from Prime Minister Eisaku Sato urging Japanese to “respect other countrys’ social habits.”

It’s supposed to be a guide about what to do, but mostly, it tries to help Japanese avoid em­barrassment to themselves, and—presumably—to their government.

The “manners” guide, therefore, often seems as overdone as its little, red-face cartoon character tourist, who, so help me, has buck teeth.

From the moment he enters the plane, the Japa­nese is warned that “this is not a sight-seeing bus; it is an international place. There is a limit to comfort inside a plane. Don’t remove your pants. Wear comfortable clothes, and if you must change, please use the toilet.” 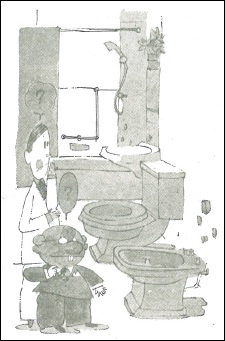 This is but the first of a series of culture ob­stacles which the booklet tries to untangle:

“You may feel hesitant (about how to use a for­eign toilet) but it’s easy after a while. First, lock the door. Then lift the toilet cover and you will see a seat shaped like a horseshoe. It may be hang­ing on the wall.”

“It is very dangerous,” the booklet warns, “to squat Japanese-style on the toilet seat. Many people have slipped and injured themselves. Just sit down and be comfortable. After you finish, use toilet paper and be sure you flush the toilet enough.”

In Europe, the booklet notes, there may be an identification problem. “Many toilets have a bidet. It looks like a toilet, but it is shorter, and has no seat. It is a special washing device for women. It has no use for men. It is wise not to use it, but if you do, check the water temperature carefully; some people have been burned.”

The bath is an even bigger puzzle. “The main difference,” the booklet explains, ” is that you finish everything inside the tub—there is no place to wash outside, as in Japan.”

The recommended strategy is to bathe and then take a shower, but if that’s not possible, to drain the soapy water, re-fill the tub, and then have a good soak, Japanese-style.

“Always pull the plug when you finish, and wash the tub with hot water,” the reader is told. “And be careful of the water faucets. In France and Europe, ‘c’ means hot and ‘f’ is cold, but in America and England, ‘h’ is hot and ‘c’ is cold.” 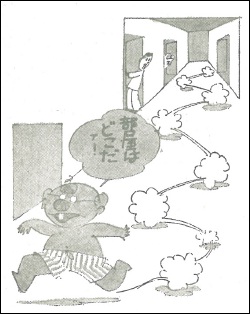 The pressure is just beginning. The booklet doesn’t tell Japanese how to dress, but it warns them to keep those clothes on. “The hotel corri­dor is like being outside the hotel. Don’t walk there in your underwear, or wear slippers. And don’t linger there, talking loudly.” 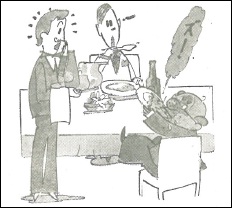 Eating at the table is one string of “don’ts”— don’t make noise chewing, don’t laugh loudly, don’t use a toothpick sucking your teeth, don’t belch (“this is especially prohibited”), don’t drink soup from the bowl (a common custom when drinking Japanese soup), don’t drink too much booze (“in foreign countries, alcohol is like an appetizer”—ed. note: that’s why so many of them are fat), and if you drop anything, “Don’t show emotion—ask the waiter to pick it up.”

And when the Japanese visitor escapes the hotel, there are more rules on how to tip, how to take care of money (“all American bills are the same size, so watch the numbers carefully”), and even taking pictures (“always ask permission; never take photos at military bases, airports or sea ports”). “How do they feel about Pearl Harbor?” a Japanese friend cracked to me.

For those who can’t remember all these foreign ways, a surefire suggestion: “Just follow the tour leader; do as he does.”

For men, some special tips: “Don’t spit on the street, don’t litter, and don’t ever urinate in public (another common sight in Japan)—even if it’s a back street, or under a bridge.”

And then, one last warning: “Be careful taking medicine powders; some people think they’re narcotics.”

If Japanese read this booklet too literally, it might become the national motto.