“Friends—are you suffering from burned-out taste buds? Does your daily fare reek of vile chemicals, additives, pesticides which take the joy from eating pure food? Are you concerned about the disastrous effects of loading your body with pack­aged groceries with the small print reading like a lab report? Hmmmmm?

“Well, then, join the millions around the world who are turning on to natural food—organic food— pure products from Mother Nature’s bosom. And live to be 100!”

You’ve never heard a commercial quite like that. But in time to come, it’s not beyond the realm of possibility that the health food fanatics will buy time to ballyhoo perhaps the fastest growing cult in our cult-ridden Age of Aquarius.

WEEKENDER took note of the burgeoning “or­ganic food” wave which is sweeping the globe—not that it is a new thing.

There’s a fast-multiplying group in Tokyo who sing the praises of organic foods. Almost mystical in their quest to quell tired blood and all the other evils they attach to the “bad trip” inherent in cooking and eating what the packagers and canners offer in supermarts, the pure food faddists are nigh Messianic in their zeal.

New Yorker Bob Simon and his wife, Junko, are perhaps typical of the “cult” in Tokyo. 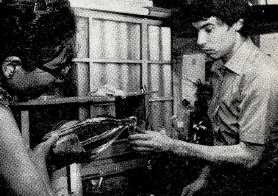 “Our bag is the clean food bag,” Bob told WEEK­ENDER during a shopping trip to an organic food store in Gotanda. “Since I’ve turned on to clean food, I feel better all over.”

“There are many health heads who will tell you their regimen has healed them from everything from cancer to piles and back to the common cold. I don’t buy any of that—but I hope I never have need to refute them.

“Last year I was losing my hair. With every combing, my forehead went up and back. My father still has all his hair. Suppose we had our photo taken together.

“Nope. I wasn’t about to let those lousy com­mercials seduce me out of any credibility I could give their products. I bought some of this and I bought some of that. I went to my pure food ‘con­nection’ and learned of the ancient knowledge of the wonders of chewing genmai—you know, brown, unpolished rice—200 times and the wonders of not having more than one liter of liquid a day. Any liquid.

“No, there wasn’t an in­stant miracle. But I’m not firmly rooted. It either works or is a happy coin­cidence—and I don’t care which. At any rate, my hair not falling out any more and I feel terrific.”

The Simons also use a noxious-looking black powder to clean their teeth. They admit it tastes awful. But they have no cavities.

Their bright-eyed son, Elon 4, had the only perfect set of teeth in his kinder­garten class of 200, Bob says, and attributes it to eating “clean sweets and not neces­sarily brushing after each meal.”

Junko Simon cooks full meals from the almost end­less array of health foods offered at a dozen or so stores throughout Tokyo—and in lesser variation in leading department stores.

“People not turned on to our health thing have eaten with us and have sworn they were being served chicken, veal or what have you,” Bob says earnestly. “It’s all from soy beans, pure nutty ma­terials and stuff of that ilk.

“And the beautiful thing is, everything tastes better once your taste buds have been liberated.”

He and Junko cite friends whose eyesight has improved after going on a straight diet of health foods. Bob insists his finger nails are stronger and more resilient. His legs are stronger, he says.

“Sure, we eat meat every now and then,” he admitted after WEEKENDER caught him red-handed wolfing a pastrami sandwich at Anne Dinken’s Kosher Restaurant in Roppongi. “We’re not fanatics. But by and large, we live on the pure foods.”

How about those weeds, Bob? “Yep, it grows wild in our garden at home,” he says. “It’s called ‘comfrey’ and is Russian in origin, the best we can learn.”

“I pick it, Junko washes and cooks it. You can make it like tempura and it’s de­licious. Also they sell it at the stores in buns and coo­kies. There’s supposed to be a Russian village somewhere in which the average longevity of the residents is more than 100 years. And they all eat comfrey with each meal. You decide.”

John and Yoko Lennon, Greta Garbo, violinist Yehudi Menuhin are firm advocates, according to a recent article on the phenomenon in NEWSWEEK magazine. Actor Ro­bert Cummings has been a disciple for years, living off health foods and capsuled vitamins, perhaps a paradox. Comedian Dick Gregory sub­sists only on raisins, barley and such.

Hippie farm communes in isolated spots throughout the U.S. turn out pure foods and the diners are quoted by NEWSWEEK as lauding the “health trip,” saying: “Food changes peoples heads.” Whatever that might mean.

Retail organic food stores have mushroomed over the States, with the center being —not surprisingly—Southern California, cult-prone zone of the orb.

In Tokyo, too, maybe a score of such stores exist, and we give a couple at the end of this piece.

A couple of health food restaurants are extant here, with one of the nicest—ac­cording to Bob Simon—re­cently folding in Meijiro.

“It’s a pretty expensive proposition,” he says. “Not cheap. And the restaurants have to charge high prices to make it.  Which some don’t.”

I bought a boxful of the organic goodies at a Higashi-Gotanda store and it’s not bad. The comfrey buns are tasty, although I didn’t rush out and leap over any tall buildings at a single bound. Maybe because I chased the comfrey with a can of Sapporo beer.

“This bread includes a lot of nutriment of embryo bud of rice and what which give you not only delicious taste and flavour but through the agency of Vitamin Bl, B2, B6, B12, Phosphorus (ATP), Calcium, Proteinase Amylase and many kind of Enzymes are increasing in your vital force rapidly. By the work­ing of the salivation, you can eat this bread without any drinks to avoid thirst. Have health and youthfulness with our bread. Give our bread to a growing child and mak­ing beautiful lady.”

Made no beautiful lady, but the bread was great.